A highly memorable 2016 edition of the Tim Hortons Brier has earned recognition from the Canadian Sport Tourism Alliance (CSTA). 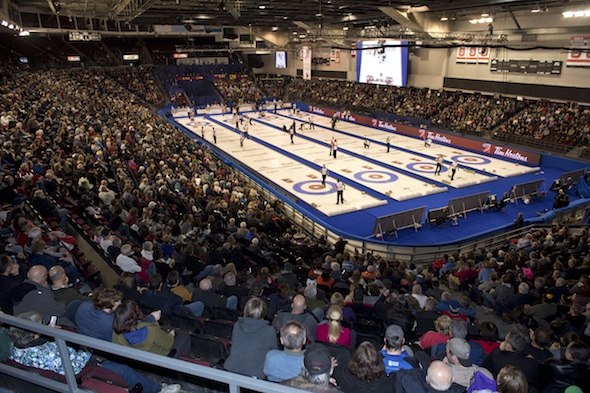 The CSTA announced on Wednesday that the 2016 Tim Hortons Brier at TD Place in Ottawa is one of three finalists for a PRESTIGE Award in the category of CSTA Event of the Year (presented by Laval SportCité) for events with a budget greater than $1 million.

The 2016 Tim Hortons Brier is competing with the HSBC Canada Sevens rugby competition in Vancouver and Ski Tour Canada 2016, which had spots in Gatineau, Que., Montreal, Quebec City and Canmore, Alta.

The award winners will be announced at the 11th PRESTIGE Awards gala luncheon on March 21 in Ottawa.

“This truly is an honour for not only Curling Canada, but our amazing group of volunteers and the host committee in Ottawa who put so much hard work in making the 2016 Tim Hortons Brier such a wonderful event for fans and players alike,” said Katherine Henderson, Chief Executive Officer of Curling Canada. “The Tim Hortons Brier is one of the premier events in Canadian sports, and we’re delighted to see it recognized in this way.”

“It was a thrill to receive word of our nomination, and it really is a tribute to the hundreds of volunteers who worked tirelessly leading up to and then during the 2016 Tim Hortons Brier,” said Elaine Brimicombe, vice-chair of the Tim Hortons Brier host committee. “At the same time, we’re grateful that Curling Canada gave us this opportunity to put on a successful event, and we’re moving full steam ahead to make sure we have the same kind of success at the 2017 Tim Hortons Roar of the Rings later this year in Ottawa.”

You can find out more about the 2017 award nominations by CLICKING HERE.