University of Alberta’s Kelsey Rocque, and her team of vice-skip Danielle Schmiemann, second Taylor McDonald, lead Taylore Theroux and coach Garry Coderre are headed to the semifinals after finishing at the top of the standings at the 2017 Winter Universiade in Almaty, Kazakhstan. 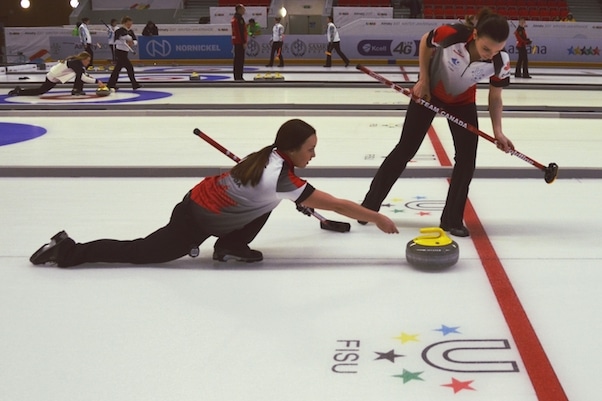 A 10-5 win over Norway’s Ingvild Skaga in the final game of the round robin secured their spot in the playoff round, but it took a few ends to get rolling. “We were just missing some shots that we don’t normally miss and they were playing exceptionally well,” said Rocque, who trailed 3-0 after two ends. “We have to give them credit, the skip was making everything, she was playing amazing. We picked it up towards the end, and got the breaks when we needed them.” But the Canadians got into gear in the third, scoring three and then never looking back. Leading 6-5 after seven, Rocque took a deuce in eight and then stole another in the ninth for the 10-5 win and a ticket to the semifinal with a first-place finish. “It’s exciting because it gives us control of hammer and rock selection, hammer being the key component,” added Coderre. “It’s great, but it’s only step one in the competition. It’s now down to the Final Four. At a minimum, we know we will battle for a medal in some shape or form.” Coderre had nothing but praise for his team, despite the slow start to their final game. “Today was a tough game because of the fact, theoretically, we were qualified, and we were playing a team that has nothing to lose, so they might gamble a little more than they usually would, you can’t blame them. For us, maybe there was some added pressure because we had a chance to finish first. But the girls fought through it.” The men will not advance to the medal round after Aaron Squires and his Wilfrid Laurier Golden Hawks team of vice-skip Richard Krell, second Spencer Nuttall, lead Fraser Reid, alternate Russell Cuddie and coach Jim Waite had their playoff hopes dashed when they suffered an 8-4 loss to South Korea’s Sehyeon Seong on Saturday morning. Seong stole the first end, then scored five points in the third to take a commanding lead. Squires wrapped up the round robin with a 9-5 win over Norway’s Steffen Walstad. 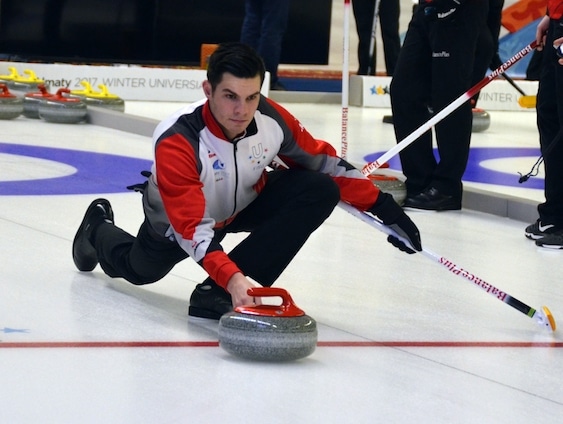 Rocque’s opponent in the semifinal will be decided after a tie-breaker between Great Britain’s Gina Aitken and Switzerland’s Briar Huerlimann. Russia’s Victoria Moiseeva and Sweden’s Isabella Wranaa will meet in the other semifinal on Monday (Sunday 10 p.m. EST). “Everything kind of just lined up for us,” Rocque said about ending up in first place and heading into the medal round. “We won the games that we needed to, did what we could, and everything just seemed to work out in our favour. Any team we play moving forward, we’re going to have to bring our A game. We have to keep our level of play up, and hopefully come out on the good side.” Live scoring will be available on the official event website, almaty2017.com/.