ST. CATHARINES, Ont. — Veteran skip Kerry Galusha of the Northwest Territories (Yellowknife) was a bundle of nerves after a 9-6 victory over Sarah Koltun of the Yukon (Whitehorse) on the opening draw of the pre-qualifying round at the 2017 Scotties Tournament of Hearts. 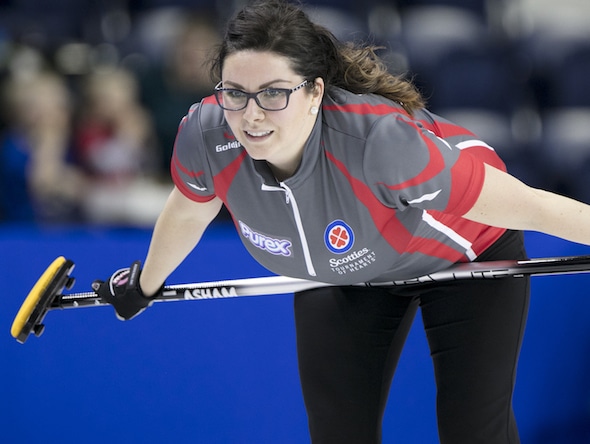 Galusha, who is backed vice-skip Meagan Koehler, second Danielle Derry, lead Sharon Cormier, alternate Shona Barbour and coach John Epping, said she never got comfortable during the game, even after taking control with a four-ender in the fifth end Thursday night at the Meridian Centre. “I’m still shaking,” she said minutes after the game. “No matter how many times I have been here before, the nerves take over.” In the other pre-qualifying game, Melissa Adams of New Brunswick (Fredericton) downed Geneva Chislett of Nunavut (Iqaluit) 11-6. Galusha said the nerves she experienced were a bit unsettling and had coach Epping wondering if she was OK. She said she was playing slowly and that put her team in time-clock trouble. “If I am not nervous, there is an issue. But today was a little over the top. Maybe I am more afraid to lose a little bit. I am not usually that indecisive. That’s not me. “People think you are such a veteran, you should not be nervous. It’s still tough.”

New Brunswick got out to a quick 6-1 lead after three ends and never looked back against Nunavut. “It’s nice to get that first game out of the way,” Adams, a former World Junior Women’s champ, said. “I think we were a little nervous and a little bit heavy early and here and there throughout the game.” She said it was very important to start off with a win. “We have three games here and our backs are against the wall. We want to be in that (final) game Saturday and have a chance to play in the rest of the event. We have very little wiggle room.” Pre-qualifying round-robin games will be played at 8 a.m. and 4 p.m. Friday. The final between the top two teams in the pre-qualifying round-robin will be played Saturday at 2:30 p.m. ET during the opening draw of the Scotties to determine the team that gets the 12th and final berth into the main round-robin field. TSN/RDS2, the official broadcaster of Curling Canada’s Season of Champions, will provide extensive coverage of the 2017 Scotties Tournament of Hearts, with 66 hours of live broadcasts scheduled. For ticket information, go to: www.curling.ca/2017scotties/tickets/ For schedule information, go to: www.curling.ca/2017scotties/draw/ Live scoring for the 2017 Scotties is available at www.curling.ca/scoreboard/#!/competitions/2236 This story will be available in French as soon as possible at www.curling.ca/2017scotties/?lang=fr