Robyn MacPhee is finding her comfort zone in the Ford Hot Shots competition at the Scotties Tournament of Hearts. 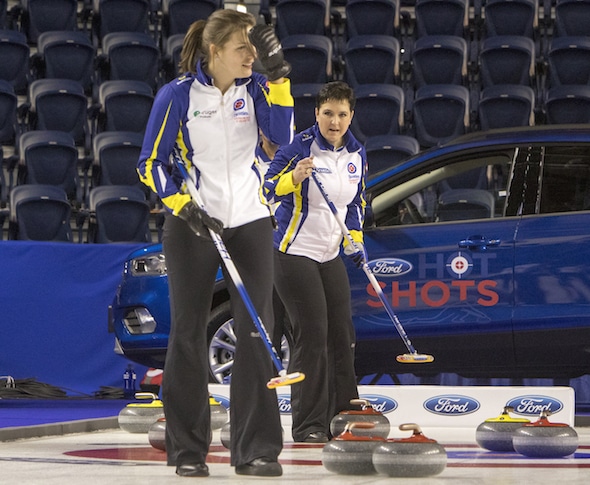 MacPhee, who finished second in the competition last year in Grande Prairie, Alta., is once against in the hunt for the top prize at the Meridian Centre in St. Catharines.

MacPhee scored 19 points Friday in the opening round to vault her into a four-way tie for top place, along with Ontario skip Rachel Homan, Ontario third Emma Miskew and Northern Ontario lead Sarah Potts.

They will gather again today in the final for a chance to win a two-year lease on a 2017 Ford Escape SE from Ford of Canada.

MacPhee, who also finished fourth previously, admitted she has had great success in the Ford Hot Shots.

MacPhee admitted she gave up practising the shots beforehand.

“The ice we play on at home is so different than arena ice,” she said. “We tried to practise them once but just couldn’t make them.”

Hackner, skipping Northern Ontario in the final of the 1985 Brier final, made his famous steep-angle thin double-takeout against Alberta’s Pat Ryan to score two in the 10th end and force an extra end, in which Hackner stole the winning point. Potts’s dad Rick Lang, by the way, was the vice-skip who held the broom when Hackner threw his shot.

Schmirler, meanwhile, scored a game-turning three in the final of the 1997 Olympic Trials in Brandon, Man., against Alberta’s Shannon Kleibrink by making a tough in-off to remove a Kleibrink stone sandwiched between two Schmirler stones in the four-foot. Interestingly, Kleibrink had to throw the shot herself in Friday’s Ford Hot Shots preliminary round. Schmirler would go on to win that game, and followed that up with a gold-medal win at the 1998 Winter Olympics.

The other three shots were crowd-pleasers: a straight raise to the button; a drag-effect double takeout; and an around-the-horn triple-takeout to score two.

: a straight raise to the button; a drag-effect double takeout; and an around-the-horn triple-takeout to score two.

Players were given a series of points, from five to zero, depending on how well they executed the shot.