ST. CATHARINES, Ont. — Rachel Homan had just signed the paperwork for a two-year lease for a 2017 Ford Escape SE when she issued a challenge to the men who will be competing at the upcoming Tim Hortons Brier in St. John’s. 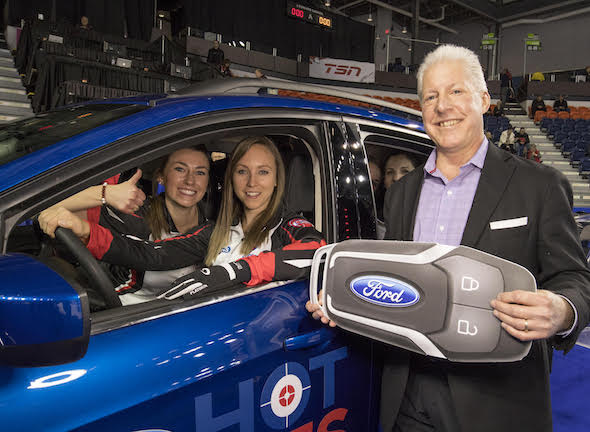 Homan, who won the competition here at the Scotties Tournament of Hearts with an outstanding 21 out of 25 points, said if the men don’t beat her total, she should get that Ford vehicle as well. That won’t happen, of course, but Homan shot the lights out during the final of the Ford Hot Shots at the Meridian Centre, beating Ontario teammate Emma Miskew 21-11. “I missed the easiest one, too – brutal,” said Homan of the drag-effect takeout. Homan, who also won the 2013 Ford Hot Shots competition and followed up by winning her first of two Scotties titles, scored two-out-of-five on that shot, then went on a roll, nailing the Al Hackner double and the Sandra Schmirler in-off. After getting four out of five on the raise tapback, she sent granite flying in the around-the-horn triple. Four of the five shots were takeouts, which plays right into the strength of Homan’s game. That’s not to say there are weaknesses elsewhere though. “Yeah, I like throwing takeouts once or twice a year maybe” she said with a laugh. “It’s fun and fun for the fans to watch all the rocks in play and the different angles. It’s nice to get those big-name shots – the Hackner, the Schmirler. It’s fun to play them and be a part of that history in curling. A fun day.” Hackner, skipping Northern Ontario in the final of the 1985 Brier, made his famous steep-angle thin double-takeout against Alberta’s Pat Ryan to score two in the 10th end and force an extra end in which Hackner stole the winning point. Schmirler, meanwhile, scored a game-turning three in the final of the 1997 Olympic Trials in Brandon, Man., against Alberta’s Shannon Kleibrink by making a tough in-off to remove a Kleibrink stone sandwiched between two Schmirler stones in the four-foot. Kleibrink, skipping Alberta at this Scotties, held the broom for Miskew in the final. Miskew won $2,000 for second place. In the third-place game, Robyn MacPhee of Prince Edward Island defeated Sarah Potts of Northern Ontario 13-10. McPhee won $1,000.