ST. CATHARINES, Ont. — There is something about St. Catharines that brings out the best in Stacie Curtis. The Newfoundland/Labrador skip from St. John’s won the Canadian junior championship here in 2007, and is off to a 2-0 start at the Scotties Tournament of Hearts.

Curtis got her second win on the Sunday afternoon draw, defeating British Columbia’s Marla Mallet from Maple Ridge 10-5. Curtis broke a 2-2 tie with a five-ender in the fourth end and cruised the rest of the way. It was the third loss in as many games for the B.C. team.

Curtis said being at the Heart Stop Lounge brought back memories for her. The lounge is located in the St. Catharines Golf and Country Club, the site where Curtis won that Canadian junior title a decade ago. She was the silver medallist at worlds that year.

“You always have a good feeling going back to a place where you have had success in the past,” Curtis said. “When we were waiting to do our march out for the opening of the HeartStop (Lounge), (second/sister) Julie (Devereaux) and I actually sat down, we think, on the scoreboard where we won. It’s pretty cool.”

She’s excited about the week ahead.

Curtis said she is pleased with her team’s first two games.

This is Curtis’s fourth appearance at the Scotties. She said the team is learning how to play on arena ice and has played more this year leading up to the championship.

She said the team was focused on getting games where and whenever it could. That meant one bonspiel in Ontario and playing junior men’s and women’s teams, as well as games against men and women at home.

“We played everybody back in St. John’s; everybody we could.” 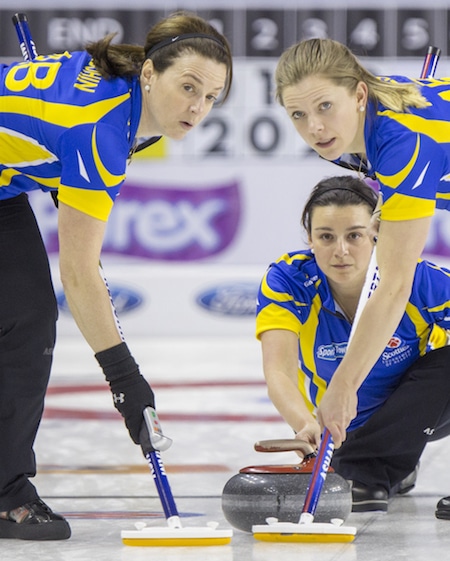 Alternate Heather Nedohin, left, stepped in at lead for Team Alberta on Sunday at the Scotties. (Photo, Curling Canada/Andrew Klaver)

The Newfoundland/Labrador team is back on the ice tonight at 7:30 ET for a game against Shannon Kleibrink of Alberta (1-1; Okotoks).

In other games in the afternoon draw, Ontario’s Rachel Homan of Ottawa moved to 3-0 with an 8-3 win over Prince Edward Island’s Robyn MacPhee (0-2; Charlottetown), Quebec’s Eve Bélisle of Mount Royal got her first win in three games, defeating Alberta 9-5, and Manitoba’s Michelle Englot of Winnipeg ran her record to 3-, with an 8-4 win over Kerry Galusha of the Northwest Territories (1-1; Yellowknife).

There was quite the sight on Sheet D, where alternate Heather Nedohin was in the Alberta lineup at the lead position, replacing Alison Thiessen. Nedohin is expected to share some of the skipping duties with Kleibrink this week.