ST. CATHARINES, Ont. — They’re the defending champs, but they’re not the talk of the town — not yet, anyways — at the 2017 Scotties Tournament of Hearts. 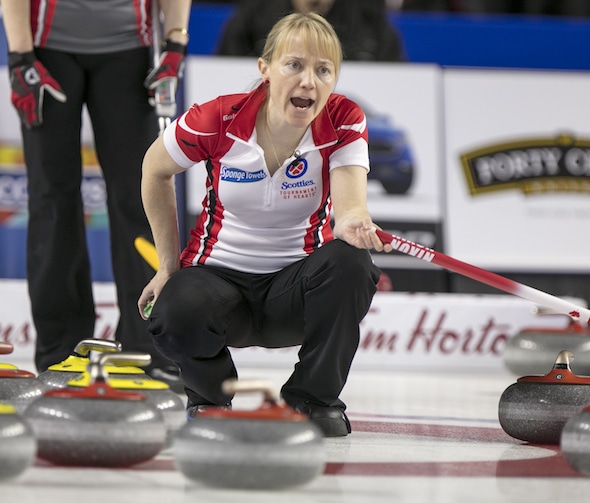 But it’s the team to whom they lost — home-province favourite Rachel Homan of Ontario — and Michelle Englot’s squad from Manitoba, both of whom carry perfect 5-0 logs, that are proving to be the headline-generators in St. Catharines.

“I don’t mind it,” said a smiling Carey on Tuesday, moments after her team’s 7-4 win over Kerry Galusha of the Northwest Territories (3-3; Yellowknife).  I don’t really care one way or the other, but I don’t hate people not talking about us. It doesn’t really bother me.”

Based on the solid shooting performance on Tuesday morning against the Territories, that may change in a hurry. Canada escaped a nervy first end — Carey needed to make a wonderful draw to score her single, looking at four Territories counters — and never trailed, scoring deuces in the fourth and eighth ends, and putting the game away with a steal of one in the ninth.

“It was pretty solid up and down,” said Carey. “I mean, we let a few points get away and it was a little closer than it should have been. But overall, we felt like we played really well, we were positioning rocks well, we had them scrambling a bit, so we felt good about that.

In the other morning-draw assignments, Prince Edward Island’s Robyn MacPhee (Charlottetown) shot a dandy 89 per cent in nailing down her first team’s first victory after four defeats, a 9-4 victory over Nova Scotia’s Mary Mattatall (1-4; Windsor); Northern Ontario’s Krista McCarville (3-2; Thunder Bay) stole single points in the fourth, fifth and sixth ends en route to a 6-3 triumph over Newfoundland/Labrador’s Stacie Curtis (2-3; St. John’s); and Alberta’s Shannon Kleibrink (3-2; Okotoks) stole one in the 10th end and three more in the 11th for a 10-7 win over Saskatchewan’s Penny Barker (0-5; Moose Jaw).

Kleibrink was in the alternate’s role for the win because of her nagging back injury, ahd Heather Nedohin took over at skip. Kleibrink said after the game she’d also be sitting out the afternoon draw to give her back some rest.