Manitoba bounces back in style at 2017 Scotties

ST. CATHARINES, Ont. — After a potentially shattering loss Tuesday night at the Meridian Centre, Manitoba skip Michelle Englot had no time to dwell on it at the 2017 Scotties Tournament of Hearts. 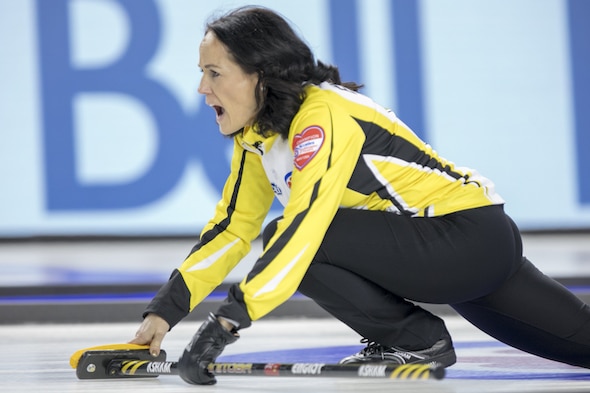 Michelle Englot’s Manitoba team came back strongly with a victory on Wednesday morning at the Scotties. (Photo, Curling Canada/Andrew Klaver)

But instead of losing sleep over it, Englot was back at the Meridian Centre bright and early on Wednesday morning and took care of business in an efficient fashion — she broke open a tight 2-2 game through four ends by stealing four in the fifth end, singles in the sixth and seventh ends and a game-ending deuce in the eighth for a 10-2 triumph over Prince Edward Island’s Robyn MacPhee (2-5; Charlottetown).

The win maintained Manitoba’s hold on second place with a 7-1 record, behind only unbeaten Rachel Homan of Ontario (8-0; Ottawa).

“It was big (to win on Wednesday morning),” said Englot. “We could have pulled one off last night and we didn’t, but we still want to keep on rolling. We talked about (Tuesday night’s loss), but you still need to move on. I didn’t sleep bad, even though it was a bit of a late night by the time we got back to the hotel and a quick turnaround for this morning. But it was good to get back out there quickly, for sure.”

Having said that, Englot suggested there was room for improvement — particularly in her own performance.

“I’m struggling a little bit; I’m still not throwing the way I need to be throwing,” she admitted. “I need to get back to how I was throwing in the first few games. But the girls are throwing great; we had tons (of opportunities) set up in that game. We put rocks in good positions.”

That, combined with Manitoba’s record, has Englot optimistic about the remainder of the round robin and possibly even looking ahead to the playoffs

“That’s (seven wins) the magic number,” said Englot. “Usually; sometimes, maybe not. We could use one more. Eight is probably a guarantee. One more win and we’ll be good.”

Ontario kept its perfect record intact with a 6-3 triumph over Newfoundland/Labrador’s Stacie Curtis (2-5; St. John’s). Homan’s Ottawa team put the game away with a stolen deuce in the eighth end.

In other Wednesday morning play, Alberta’s Shannon Kleibrink (with Heather Nedohin handling skipping duties) was an 11-5 winner over B.C.’s Marla Mallett (0-8; Maple Ridge). The Okotoks-based Alberta team improved to 4-3 with the victory.