ST. JOHN’S – It was only the qualifying round of the Ford Hot Shots skills competition, but Brad Gushue gave the hometown fans a glimpse Friday of the type of shots they hope will bring the Tim Hortons Brier championship back to St. John’s. 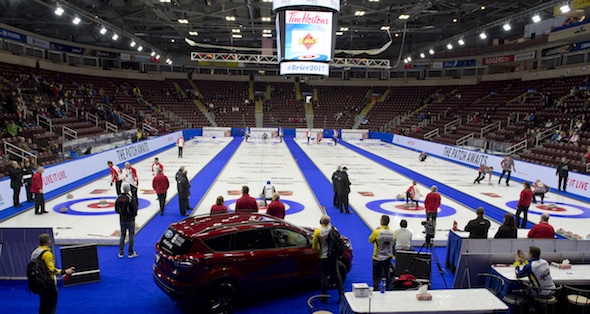 About to begin play in his 14th Brier, the Newfoundland skip had perfect scores on two of the five shots, narrowly missed the maximum on two others and scored 19 points of a possible 25 to qualify third.

The four will attempt the same shots with the winner getting a two-year lease to a 2017 Ford Escape SUV. The runner-up earns $2,000 and the third-place finisher wins $1,000.

Gushue was quick to caution optimistic fans not to put too much stock in the competition. But could it be a good omen?

“Yeah, hopefully,” he said. “But again, don’t put too much stock in it. I played great last year and ended up winning but we didn’t end up winning the (Brier) title. I’ve also done poorly in it and had good weeks so it’s not going to tell how the week is going to go.

“It’s certainly nice to play for a car but at the end of the day no one remembers who won the car last year. People seem to forget I won it last year.

“It’s certainly good to get out throw a few rocks, with a few people around. Yeah there’s some benefit but it’s not the be all and end all.”

This 23rd annual edition of the skills competition at the Brier tests curlers in five different shots, including two replicate famous shots made by Northern Ontario’s Al Hackner in the 1985 Brier final and Saskatchewan’s Sandra Schmirler in the final of the 1997 Olympic Trials.

The Hackner shot was a razor-thin double-takeout against Alberta’s Pat Ryan to score two in the 10th end and force an extra end, in which Hackner stole the winning point.

The Schmirler shot, a steep in-off, scored a game-turning three against Alberta’s Shannon Kleibrink. Schmirler went on to win that game and followed it up with a gold medal at the 1998 Winter Olympics.

The three other shots are a straight raise to the button, a drag-effect double takeout, and an around-the-horn triple-takeout to score two.

Players earn a series of points, from five to zero, depending on how well they executed the shot.