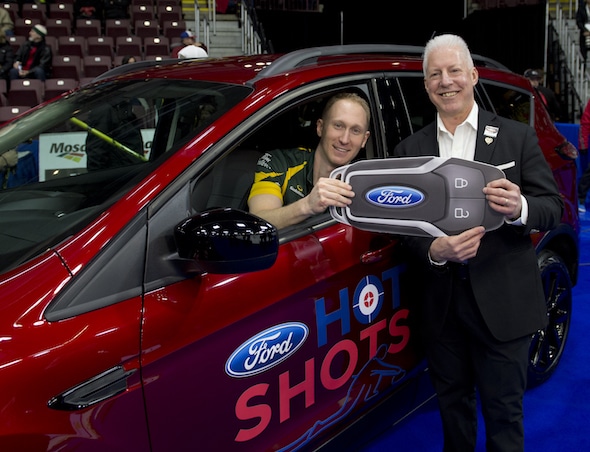 The Northern Ontario skip out of Sault Ste. Marie was solid on all five shots while Crête struggled on three of them and finished with just 12 points. Jacobs won a two-year lease on a 2017 Ford Escape SE SUV while Crête gets $2,000. Hometown favourite Brad Gushue finished third but needed a measurement to beat Jacobs’ teammate Ryan Fry. Gushue won the measurement, and $1,000, by 0.8 centimetres. It was his decision on what he considers the most difficult of the five shots – the Al Hackner double takeout and stick for two – that turned the tables in Jacobs’ favour. “Most difficult is probably the Hackner shot because it’s so thin,” he said after the win. “If you can get four of five (points), just make the double, that’s a huge win on that shot. That’s why we decided to throw that shot hard instead of soft. Throw it harder, make the double and if you stick, bonus.” He scored four and Crête just one. “It’s really fantastic that Ford Canada puts up something like that for the players every year,” he said of winning the vehicle. “We’re grateful to be able to play for that. It’s entertaining for the fans. “This is probably the most fans we’ve ever seen for a Ford Hot Shots. It’s a special little competition before the Brier.” It’s may also be something of a curse, he suggested. “I don’t know if anyone has won that and then the Brier. Could be a little bit of a curse. But curses are made to be broken….” For the record, it’s happened twice — Manitoba’s Steve Gould won the Ford Hot Shots and Brier gold in 1999, while Ontario’s Wayne Middaugh did it in 2012. And just a few days ago, Ontario’s Rachel Homan won the Ford Hot Shots and then the Scotties Tournament of Hearts — a feat she also pulled off in 2013. In the semifinals, Jacobs outscored Gushue while Crête edged past Fry. This 23rd annual edition of the skills competition at the Brier tests curlers in five different shots, including two replicate famous shots made by Northern Ontario’s Hackner in the 1985 Brier final and Saskatchewan’s Sandra Schmirler in the final of the 1997 Olympic Trials. The Hackner shot was a razor-thin double-takeout against Alberta’s Pat Ryan to score two in the 10th end and force an extra end, in which Hackner stole the winning point. The Schmirler shot, a steep in-off, scored a game-turning three against Alberta’s Shannon Kleibrink. Schmirler went on to win that game and followed it up with a gold medal at the 1998 Winter Olympics. The three other shots are a straight raise to the button, a drag-effect double takeout, and an around-the-horn triple-takeout to score two. Players earn a series of points, from five to zero, depending on how well they executed the shot.