Team Canada battles to another win at World Wheelchair Championship

Team Canada skip Jim Armstrong had to come up with a big shot in the final end to win a close battle over Finland’s Markku Karjalainen on Wednesday and keep Canada in sight of a playoff berth at the 2017 World Wheelchair Curling Championship in Gangneung, South Korea. It was a gutsy performance the day after losing two in a row and losing some ground in the standings. 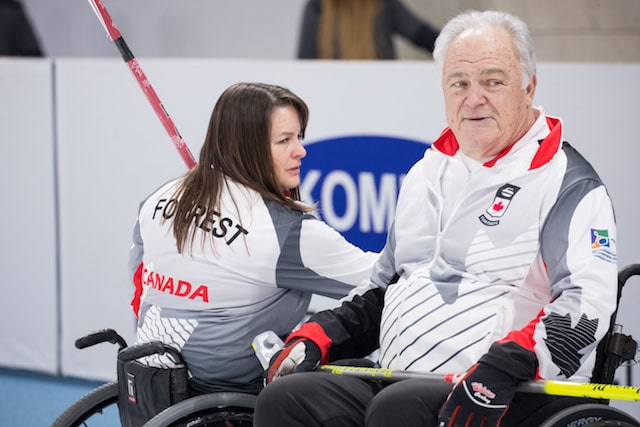 “Yesterday was one of those days you don’t want to dwell on too hard,” said Armstrong, who is backed by vice-skip Ina Forrest, second Marie Wright, lead Mark Ideson, alternate Ellis Tull and coach Wayne Kiel. “It’s nice to come back today. The ice was a bit trickier today as the game went on and Finland did well to handle it because they were having to keep coming back, keep coming back, and come back they did.” Team Canada found themselves in trouble in the later ends, even though they had scored four points early and led 5-2 at the break. A couple of steals by Finland in six and seven meant Canada trailed 5-6 heading into the final end. But the team rallied in the eighth, putting lots of rocks in play and keeping the pressure on their opponents. Forrest made two perfect take-outs to set up Armstrong for a winning raise take-out and the 8-6 win. “It was more about the last three ends – just surviving it and trying to leave yourself with something that makes sense,” said the skip. Canada now sits in second place in the standings, tied with China and Scotland with 4-3 records, and all eyes are on securing a playoff berth tomorrow. “This is just like early play-offs. Every game now has quite a bit of importance to it,” said Armstrong. “Virtually everybody out there, if it’s not for play-offs, it’s for relegation. Every team is pretty much in control of their own destiny, they’re not necessarily having to look for help on other sheets or anything; they have to win it themselves.” Armstrong acknowledged that this Team Canada is still finding its rhythm. “We’ve been struggling. It’s a new team,” he explained. “We’ve tried a couple of different line-ups, trying to learn a little bit going into next year. So that leaves us with a little bit more challenge this year. We’re in a situation where we can control it ourselves. In any competition, if you are able to say that, then you’re in good shape.” 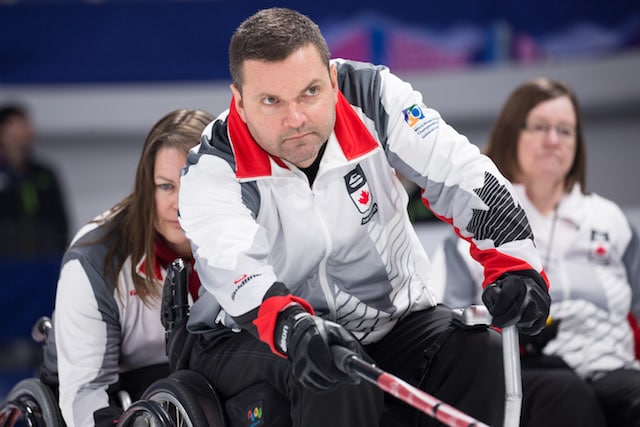 The round robin wraps up on Thursday with Team Canada playing Rune Lorentsen of Norway, the 2016 silver medallist (Wednesday 8 p.m. EST) and last year’s gold medallist, Andrey Smirnov of Russia (1 a.m.). For more information about the 2017 World Wheelchair Curling Championship, go to: www.worldcurling.org/wwhcc2017