Canada will play Norway in a tiebreaker to determine who will capture the final playoff spot at the 2017 World Wheelchair Curling Championship in Gagneung, South Korea. 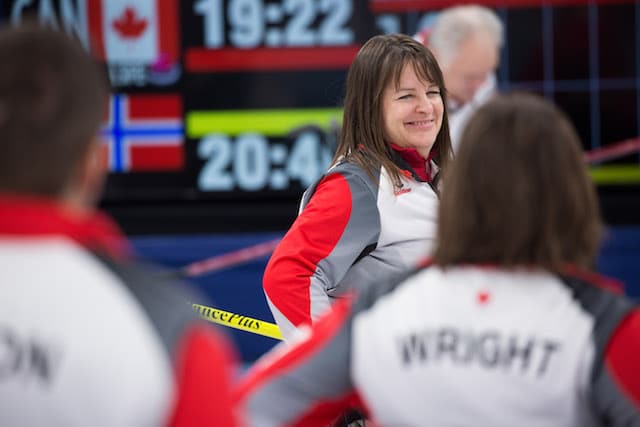 But skip Jim Armstrong, vice-skip Ina Forrest, second Marie Wright, lead Mark Ideson, alternate Ellis Tull and coach Wayne Kiel will once again be facing Norway’s Rune Lorentsen, who stole his way to a 9-2 victory over Canada on Wednesday. “When you’re behind on this ice, it’s tough to come back,” said Armstrong about trailing the Norwegians after giving up a steal of four in the fifth end. “We just were on the wrong side of everything. We were needing a deuce, so we gambled a little bit – but rather than being top four, we were back four, rather than being four-foot, we were back twelve – just all the things can go wrong.” But the team rebounded from that loss to post a solid 9-2 win over 2016 gold-medallist Andrey Smirnov of Russia in the final game of the round robin and assure themselves a spot in the tiebreaker. “We feel great,” said lead Mark Ideson after handing Russia their only loss of the competition so far. “We controlled our own destiny today. We were hoping to pull one out against Norway this morning but that one didn’t go our way, so luckily we had a good game against Russia this afternoon and put ourselves in a position to be in the tiebreaker. I think we learned some things from the game this morning that we’ll try to do differently tomorrow and we’re feeling pretty good so I think we’ve got some wind in our sails going into the tiebreaker.” Canada finishes the round robin with a 5-4 record, trailing Russia (8-1), Scotland (6-3) and China (6-3) and will play Norway for fourth place and a playoff berth. “We’ve been a little inconsistent but we’re grinding out some wins and we’re sticking together and we’re working through it,” said Ideson. “We’re a good solid team, a good group of people, and that’s really helped us get through the week.” The tiebreaker between Canada and Norway takes place Thursday 8 p.m. EST. For more information about the 2017 World Wheelchair Curling Championship, go to: www.worldcurling.org/wwhcc2017