Canada hangs on for win over South Korea

BEIJING — A sixth straight victory has preserved Canada’s position on top of the standings at the 2017 CPT World Women’s Curling Championship, presented by Ford of Canada. 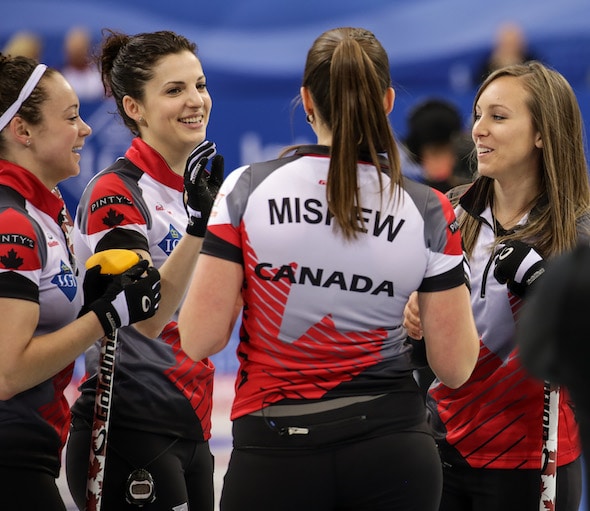 Team Canada’s Rachel Homan was pushed to the limit on Tuesday morning at the Capital Gymnasium by South Korea’s Eun Jung Kim before pulling out a 9-8 victory, leaving Homan’s Ottawa team with a perfect 6-0 record to lead the round-robin standings.

It wasn’t pretty at times, as South Korea — which is ramping up to host the 2018 Winter Olympics next year in PyeongChang and investing in its curling program — pushed hard, and led 5-4 through six ends.

But Homan, who was superb throughout the game, made a precision tap to score four in the seventh end, and followed with a wonderful freeze in the 10th end that sealed the victory.

“We were struggling with our rocks for a lot of the game and we weren’t putting our rocks in good spots,” said Canadian vice-skip Emma Miskew. “Luckily, we left Rachel with a couple savers and she made them, so we were happy about that.

“We’re throwing really well, and its always tough when you’re throwing well and not getting results. You just have to kind of let that and move on to the next one.”

Homan made arguably her finest shot in the third end; sitting one on the button but surrounded by South Korean counters, Homan raised a Canadian guard that wiggled between two South Korean stones and nestled perfectly up to the shot stone to get a go-ahead deuce.

Teammates have suggested Homan is in a zone this week in Beijing, and Homan didn’t disagree, but was quick to point out her shots have been team efforts.

“Yes, as much as you can be out there,” she said of being in a zone. “I’m really confident in us being able to call the right line and weight and be able to make those big shots when we need them. When we’ve had to make a big one, the team has been awesome in giving me the confidence. We’ve made some really big shots this week that have saved us.”

“We’re going to have to be on our ‘A’ game,” said Homan. “We can’t have too much of a similar game like this one; we were throwing them great, but we just have to figure out that ice.”

In other Tuesday morning games, Sweden’s Anna Hasselborg kept pace with the leaders, improving to 5-1 with a 10-4 dismantling of the Czech Republic’s Anna Kubeskova (3-3); Nina Roth of the U.S. (3-3) made a marvellous double-takeout to score a game-winning three in the 10th end in a 7-6 triumph over Denmark’s Lene Nielsen (0-6); and Russia’s Anna Sidorova (3-3) doubled Germany’s Daniella Jentsch (2-4) 8-4.