First place all locked up for Team Canada

BEIJING — It’s still a day away, but the playoffs at the 2017 CPT World Women’s Curling Championship, presented by Ford of Canada, can’t start fast enough for Team Canada. 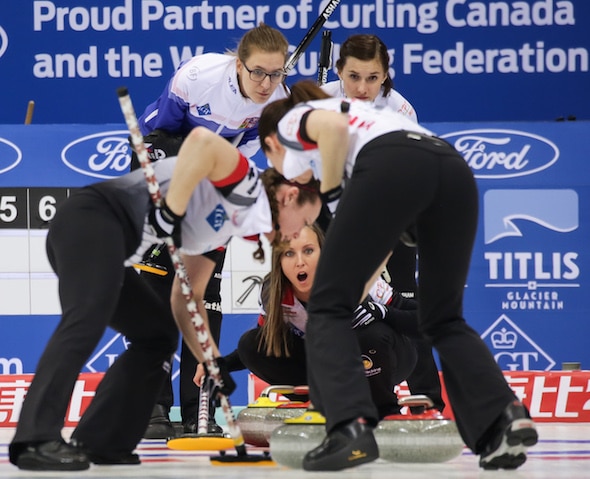 A tidy 9-3 win over Anna Kubeskova of the Czech Republic (4-5) extended the win streak of Rachel Homan’s Ottawa team to nine straight games on Wednesday night at the Capital Gymnasium. 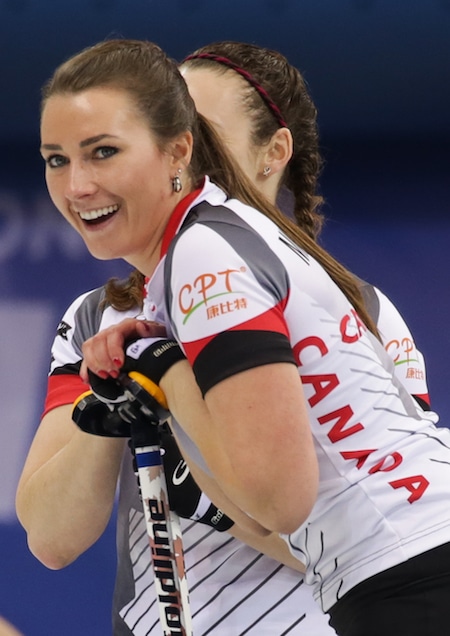 “It feels pretty good,” said Miskew after Wednesday night’s win, which required only eight ends to finish off. “It’s such a long week, and it’s nice to know now that we’ve got first place, we’ve got hammer (in the Page 1-2 game), which we love. It’s a long round robin and we’re pretty excited to know that we’re in that position.”

They’ve reached that position by simply executing at a consistently higher level than the rest of the field, as was shown by Wednesday night’s victory.

Canada was in control the whole way, scoring deuces in the first and fourth ends, then stealing two in the fifth. Another pair in the seventh, followed by a stolen single in the eighth, sealed the victory.

It completed another perfect day for Canada, in the wake of a 6-4 win over Sweden’s Anna Hasselborg in the afternoon draw, a win that clinched a trip to the Page 1-2 game.

More impressive, though, than the execution has been Canada’s ability to deal with ice conditions and rocks that have been inconsistent — largely due to building issues beyond the control of Chief Ice Technician Hans Wuthrich of Canada.

Canada has struggled, like all teams, but has refused to let the frustration get out of control.

“Exactly. We’re trying not to let any of that stuff distract us,” said Miskew. “It’s easy to let that stuff get in the way, and I think that’s how a lot of good teams can lose games. But we’re also trying to just enjoy the moment — not let the little things distract us, just stay tough. We know every team will struggle with the ice and rocks a little bit; we’re just trying to get a little bit less frustrated than the other teams.” 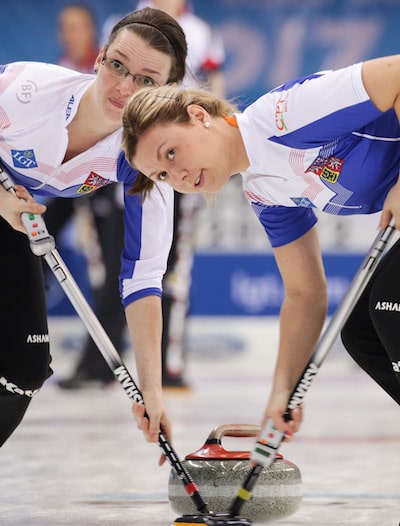 It’s working nicely, and with two more wins on Thursday — Canada completes round-robin play against Italy’s Diana Gaspari (3-6) at 9 a.m. local (9 p.m. Wednesday ET) and Denmark’s Lene Nielsen (0-9) at 2 p.m. local (2 a.m. ET) — the Canadians can become just the third team ever to go unbeaten in round-robin play at the World Women’s Championship. Sweden’s Anette Norberg did it in 2005 and went on to win gold (despite losing the Page 1-2 game), while Canada’s Colleen Jones did it in 2003, and lost the gold-medal game.

This Canadian team, though, isn’t getting ahead of itself.

“We just keep our heads down, we work hard, and at the end of the week to be in this spot, it feels great,” said Courtney. “But we still have a lot more work to do.”

For live scoring, standings and team lineups from the 2017 CPT World Women’s Curling Championship, presented by Ford of Canada, go to: www.worldcurling.org/wwcc2017.