Memorial University’s Adam Boland kept the Newfoundland & Labrador magical curling ride going this afternoon winning the 2017 USPORTS / Curling Canada University Men’s Championship at the Fort William CC in Thunder Bay, Ont. Certainly inspired by the Brad Gushue victory ten days ago, Boland’s Sea-Hawks foursome of Stephen Trickett, Zach Young and Evan Kearly, with coach Gary Ryan, ran the table winning nine consecutive games ending with an 8-4 win over Alberta’s Thomas Scoffin in the gold medal game. The turning point came in the sixth end when Boland, behind 2-1, scored three to lead by two. After forcing Alberta to a single in the seventh, the St. John’s-based team cracked a four ender effectively ending it. Scoffin score a singleton in the ninth then conceded. 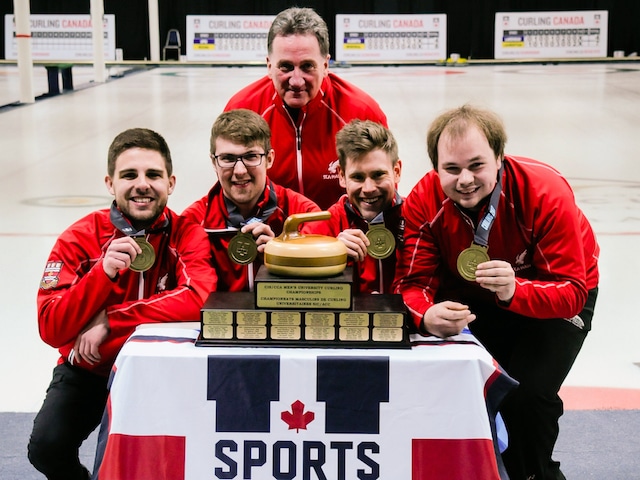 This is the second victory for Memorial in university play as Colin Thomas captured the 2011 title as the home team that season. It was a productive day for Atlantic teams on the men’s side as UPEI Panther’s Chris Gallant edged Regina Cougars and skip Sam Wills 7-6 to win the bronze medal. Gallant’s crew of Kyle Holland, Brooks Roche, Kyle McFadyen and coach Larry Rathje scored the go-ahead deuce in the eighth followed up with a force in the ninth to lead by one coming home which is how it ended. On the women’s side, Krysta Burns, Megan Smith, Sara Guy, Laura Masters and coach Ryan Lafraniere of the Laurentian Voyageurs capped a very successful curling season winning Laurentian’s first USPORT / Curling Canada gold medal for the Sudbury foursome. This gold medal hangs beside a bronze medal earned at the 2017 Canadian Juniors this past January in Victoria. Their win came at the expense of hometown favourite Hayley Beaudry of the Lakehead Thunderwolves with the final score 7-4. The game was tied at two playing the 5th end when, with last rock advantage, Burns scored three points taking control of the game. Beaudry responded with a deuce to tighten the score at 5-4. The 8th was blanked. Burns put the game away in the 9th drawing for two then running Lakehead out of stones. 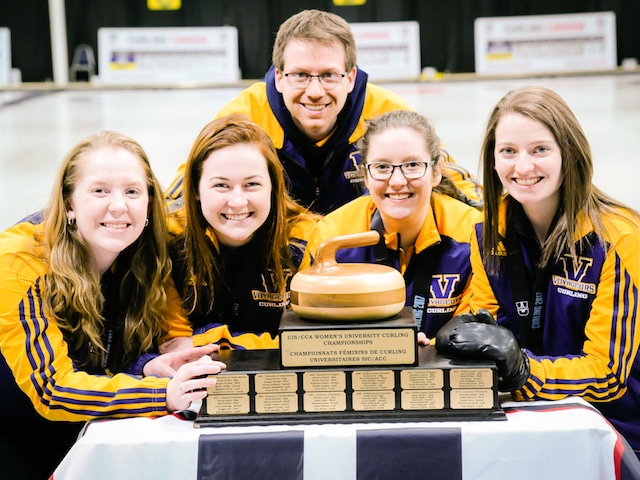