BEIJING — Just two more wins are all that separate Team Canada from gold at the 2017 CPT World Women’s Curling Championship, presented by Ford of Canada. 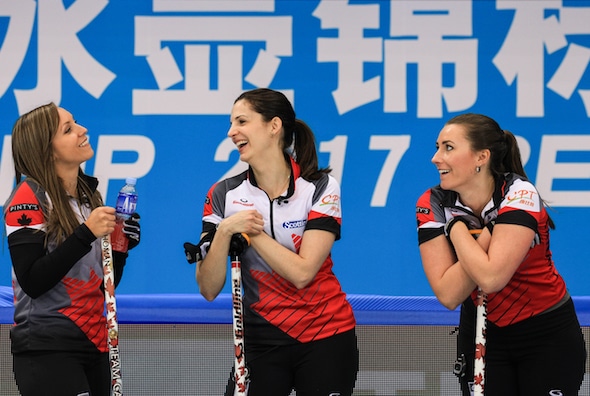 Rachel Homan’s Ottawa team completed round-robin play on Thursday afternoon at the Capital Gymnasium with an 8-4 win over Denmark’s Lene Nielsen to complete an unblemished trip through the round-robin schedule.

Norberg went on to win gold in 2005, although she had to come back from losing the Page 1-2 playoff. Jones, meanwhile, settled for silver.

But the round robin was just the stepping stone to Canada’s next mission — securing a world women’s gold medal for the first time since Jennifer Jones’s triumph in 2008 at Vernon, B.C., and the Canadians are very well aware there is plenty of work yet to do here. 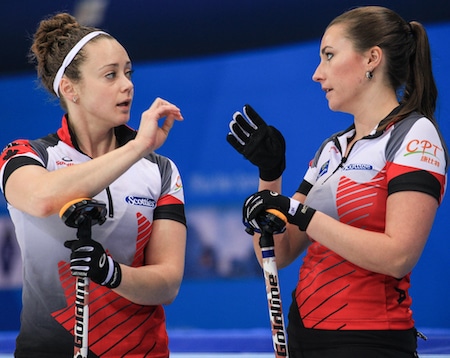 “You can go undefeated in the round robin and not win a medal, so it’s not like it’s in the bag,” said Miskew. “We still have two or potentially three tough teams to play. We’re prepared to have to play the semi, but it would be great to come out tomorrow and have a good game to get to the final.  But it’s all business for us. We’re just trying to stay patient out there, not get caught up in anything, and just play our game.”

Canada had trouble breaking away from a Danish team that entered the game winless in nine starts. The teams were trading singles for most of the game until Denmark broke through with a seventh-end deuce to take a 4-3 lead.

But the Canadians answered back emphatically with a splendid eighth end that was capped by Homan’s open hit to score three.

A steal of two the following end when Nielsen was light on her last-rock draw prompted the Danes to concede.

The loser, meanwhile, will drop into the semifinal Saturday at 7 p.m. local, 7 a.m. ET, against the winner of the Page 3-4 game.

Homan, Miskew and Weagle will be making their third World Women’s playoff appearance after winning a bronze medal in 2013 at Riga, Latvia, and silver a year later in Saint John, N.B. Courtney replaced Alison Kreviazuk at second following the 2014 worlds.

That playoff experience will come in handy, suggested Miskew.

“I mean, we’ve been in this position before, and that’s great,” she said. “In Latvia, it was very overwhelming going into the playoffs because it was our first world championship in women’s. We were there in Saint John, too, and now it’s great that it’s our third time here, and we’re used to this playoff scenario. We have two lives in the playoffs, and we’re really grateful for that.”

The playoff race behind the Canadians is still unclear, with the possibility of a tiebreaker still in the mix.

Russia picked up a big 7-3 win over the Swedes in other Thursday afternoon play, thanks to a steal of four in the ninth end. Russia can wrap up second place and a berth in the 1-2 game with a win Thursday night over China’s Bingyu Wang (2-8). A Russian loss means Canada will play Sweden on Friday night.

Russia or Sweden will be in the Page 3-4 game, and their opponent may not be determined until Friday afternoon.

Scotland’s Eve Muirhead (6-4) is in the best position to clinch the final playoff spot; a win over Anna Kubeskova of the Czech Republic (5-5) would put the Scots in the playoffs, while a loss means the same teams would meet in a tiebreaker Friday at 2 p.m. local, 2 a.m. ET.

That means the stunning run of gold medals by the Swiss has come to an end; Switzerland’s Alina Pätz heads into her final game with a 5-5 record and out of contention.

Canada, meanwhile, doesn’t need to worry about any of those scenarios. And, after an undefeated round robin, and after two previous trips to the World Women’s medal podium, Homan believes her team is ready to ascend to the top step.

“Absolutely,” she said. “We’ve put everything we have into our preparation. It’s sports, so when it comes down to it, anything can happen. But we really want to get ourselves to the final, whether we go through the 1-2 game or through the semifinal. We’ve gone both routes and we’re ready for either one.”