Championship round underway at Canadian Seniors

The championship round got underway this morning at the 2017 Everest Canadian Seniors Curling Championships in Fredericton, N.B., with the leaders after the round robin starting their quest to secure a spot in the playoffs. In Women’s play, British Columbia’s Lynne Noble finished the round robin alone at the top of the standings with an undefeated record. She’s closely followed by Manitoba’s Terry Ursel, Ontario’s Jo-Ann Rizzo and Saskatchewan’s Sherry Anderson. 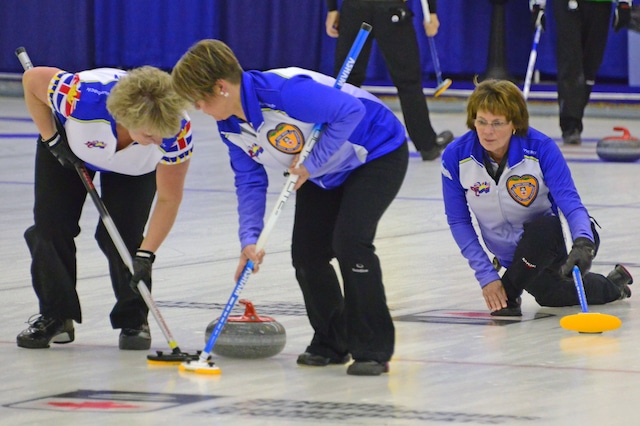 In the first draw of the championship round on Thursday morning, Noble stole a deuce in the fourth end on the way to a 6-3 win over Northern Ontario’s Peggy Taylor. In other games, Ursel opened the scoring against Kathy Hicks of New Brunswick with four points in the second end and never looked back in a 7-3 win. Saskatchewan’s Anderson was also a winner, stealing two ends in a 7-5 win over Nova Scotia’s Mary Mattatall. Rizzo came up short in a 6-4 extra-end loss to Alberta’s Cathy King. On the Men’s side, home-province favourite Terry Odishaw emerged from the round robin with an undefeated record. Quebec’s Robert Maclean, Ontario’s Howard Rajala and Alberta’s Wade White follow close behind. All four teams opened the championship round with wins on Thursday morning. Only the top four teams from each pool, Men’s and Women’s, advance to the championship round, with the rest of the field competing in a cross-over games in a Seeding Pool. Championship and Seeding Pools continue on Thursday with two more draws, at 3 p.m. and 6:30 p.m. EDT. Draw results for the 2017 Canadian Seniors will be available at www.curling.ca. For event information, visit https://www.curling.ca/2017seniors.