Canada’s Brad Gushue has a chance to make curling history in one of the most historic venues in the sport when the 2017 Ford World Men’s Curling Championship, presented by Service Experts, gets underway on Saturday in Edmonton. 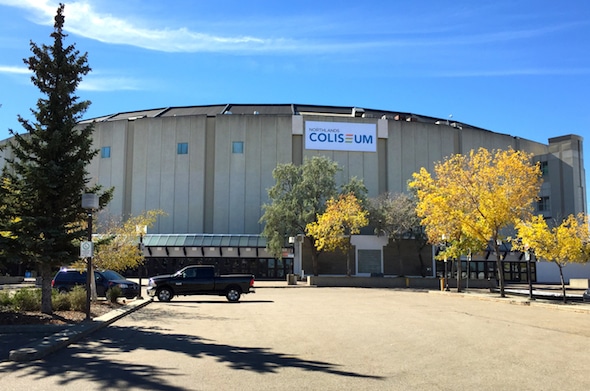 The world’s best men’s curling teams will be at Northlands Coliseum for the 2017 Ford Worlds, beginning on Saturday. (Photo, Courtesy Northlands)

On Saturday at 2 p.m. (all times Mountain) against Switzerland’s Peter de Cruz, Gushue will begin his quest to become the first skip ever to win gold medals at the World Juniors (2001), the Winter Olympics (2006) and the World Men’s Championship.

Nichols, Gushue’s vice-skip since their junior days, also can complete that triple, and join Canada’s John Morris (world juniors in 1998, 1999; world championship in 2008; Winter Olympics in 2010) as the only players to have won all three gold medals. Canada’s Ben Hebert is an honourary member, having won gold medals as Morris’s teammate in 2008 and 2010, and a world juniors gold medal in 2003 as the alternate for Steve Laycock’s Canadian team.

Team Canada will be chasing that gold medal in what will almost surely be the final major curling event staged at Northlands, where still-standing attendance records were set for the Ford World Men’s Championship (184,970 in 2007), the Tim Hortons Brier (281,985 in 2005) and the Tim Hortons Roar of the Rings Canadian Curling Trials (175,952 in 2009).

The official opening ceremonies are scheduled for Saturday at noon, and will be followed by the first draw in the 12-team round-robin competition at 2 p.m.

Canada will be looking to defend the gold medal won last year at Basel, Switzerland, by Kevin Koe’s Calgary team — the team that Gushue defeated in the Tim Hortons Brier final at St. John’s.

Canada has won a leading 35 world men’s championships in the 58-year history of the event; in addition, Canadian teams have reached the podium 51 times in those 58 previous world championships, collecting nine silver and seven bronze to go along with the gold medals.

There will be more than just a world title on the line at Edmonton, as it’s the final opportunity for countries to earn Olympic qualifying points. Following the Ford Worlds, the seven countries with the best combined results from the 2016 and 2017 world championships will join host South Korea in the field for the 2018 Winter Olympics at PyeongChang.

There will be a last-chance qualifying event in December in the Czech Republic to decide the final two entries. CLICK HERE for a look at the current Olympic points race.

While Gushue is making his world men’s championship debut, many of the skips with whom he’ll be matching wits are battle-hardened at the event.

Sweden’s Niklas Edin, for instance, is seeking to make it three straight gold medals in Ford Worlds staged on Canadian soil, after he prevailed in 2013 at Victoria and 2015 at Halifax.

At the other end of the experience spectrum is the Norwegian team skipped by Steffen Walstad, who upset Thomas Ulsrud in the Norwegian final earlier this month.

Another new face while be Jaap van Dorp of the Netherlands, as that country makes just its second appearance at the world men’s championship, and its first since 1994.

The combatants in last year’s bronze-medal game at Basel are back in the field. U.S. veteran John Shuster defeated Japan’s Yusuke Morozumi to win the bronze, and both teams are looking to take steps higher on the podium.

The field is rounded out by China’s Rui Liu, Italy’s Joel Retornaz and Russia’s Alexey Stukalskiy.

The 2017 Ford Worlds marks the 23rd time that Canada has played host to the world men’s championship, and the third time it’s been played in Alberta — the 2007 event at Northlands, won by Canada’s Glenn Howard, and in 1964 at Calgary, won by Canada’s Lyall Dagg.

The 2017 Ford Worlds mark the 23rd consecutive year of the Ford Motor Company of Canada serving as the title sponsor for Canadian-hosted world men’s and women’s championships.

Round-robin play will continue until Thursday, with the top four teams advancing to the Page playoffs, which see the first-and-second place teams playing Friday, April 7, at 7 p.m. for a berth in the April 9 gold-medal game (6 p.m.). The loser of the one-two game drops to the semifinal (April 8, 7 p.m.) against the winner of the Page three-four game (April 8, 2 p.m.). The semifinal loser and Page three-four loser will play for the bronze medal on April 9 at noon.

TSN/RDS2, the official broadcast partners of Curling Canada’s Season of Champions, will provide live coverage of Canada’s round-robin games, in addition to all playoff games.

Go to the event website, www.curling.ca/2017worldmen/, for all event information, including schedules, team lineups and entertainment in the Patch.