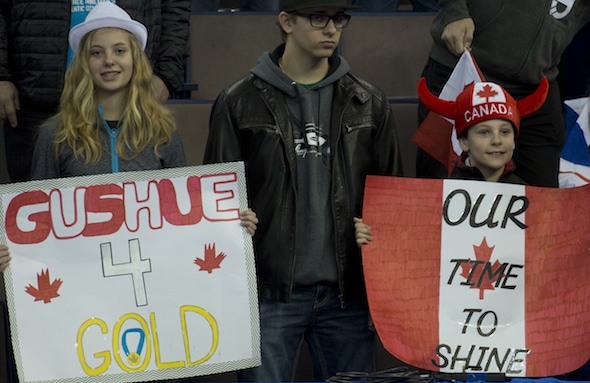 The Canadian squad skipped by Brad Gushue defeated Switzerland, skipped by Peter de Cruz of Geneva 7-5. The team from St. John’s, Nfld., weren’t immune from the misses themselves. “It was a really, really challenging sheet of ice,” said Gushue, who was supported by third Mark Nichols, second Brett Gallant, lead Geoff Walker, alternate Tom Sallows, team coach Jules Owchar and national coach Rick Lang. “We got some open misses which were very fortunate. Those misses cost them a few points and that was the difference in the game.” Although de Cruz skips the Swiss, Benoit Schwartz throws the final rocks while Claudio Pätz plays third, de Cruz throws second and Valentin Tanner plays lead with alternate Romano Meier and coach Claudio Pescia. The fun and games began in the first end with only one lonely Canadian rock causing any concern for Switzerland. It looked like the Swiss were going to be able to score three or even four but could only collect two. In the second, Schwartz grazed a takeout allowing Gushue to split the house and even the score at 2-2.

In the eighth, Schwartz flashed a takeout with his final shot leaving Gushue a draw for three and a 6-4 lead. The Swiss fourth also missed an open hit for two in the ninth that would have created a 6-6 tie but instead left Canada leading 6-5 with the hammer in the 10th end. “Really it came down to he had a couple of spots in the game when he didn’t throw it as well he would have liked and it was a new spot and it didn’t curl. Most of the rocks were curling like crazy so it kind of floated a little bit. It’s understandable because it was a challenge out there,” said Gushue. Despite the icy danger, Gushue believes the problems won’t last long. “I’m confident they’ll get there because (Jamie Bourassa’s) one of the best ice makers in the world and he’ll figure it out. The rocks have to get dulled down before you’re going to see guys curling 90-95 per cent out there,” Gushue said. Schwartz said the loss was a wakeup call for the Swiss squad. “I had almost three flashes, which is obviously a killer against this kind of team. I thought we played well, we had some opportunities. The first end we got a deuce and could have had more,” said Schwartz, who believes Canada’s opponents have to be aggressive. “If we want to have a realistic chance to beat those teams like Brad Gushue you have to play aggressive. You can’t just play takeouts and wait,” said Schwartz. On Sunday, Canada will play Russia, skipped by Alexey Stukalskiy, (9 a.m. MT), and Niklas Edin of Sweden (7 p.m.).

In other opening-draw action, John Shuster of the United States came out of the gates like Usain Bolt with a 9-2 win over Russia in a game that lasted just six ends. “It’s extremely important because every single game here is meaningful,” said Shuster of the Americans’ strong start. “Since everybody plays everybody every win you can get is crucial. To start off working your way to the top of the leaderboard as opposed to having fight from down at the bottom is a good way to start.” Yusuke Morozumi of Japan, who lost the bronze-medal game at the 2016 Men’s Worlds in Basel, Switzerland, stole four points to down Joel Retornaz of Italy 9-5. Germany’s Alexander Baumann, who went 1-10 in Basel, has already matched his win total from last year by edging Jaap van Dorp of the Netherlands 6-5 in an extra end. The Ford Worlds continue on Saturday with another draw at 7 p.m. For ticket and other event information, visit httphttps://www.curling.ca/2017worldmen/ This story will be posted in French as soon as possible at https://www.curling.ca/2017worldmen/?lang=fr TSN (RDS2 in French), the exclusive television network for Curling Canada’s Season of Champions, will provide complete coverage of the 2017 Ford Worlds.