It was a Sunday morning opportunity to raise the comfort level at the 2017 Ford World Men’s Curling Championship, and Team Canada took full advantage at the Northlands Coliseum. 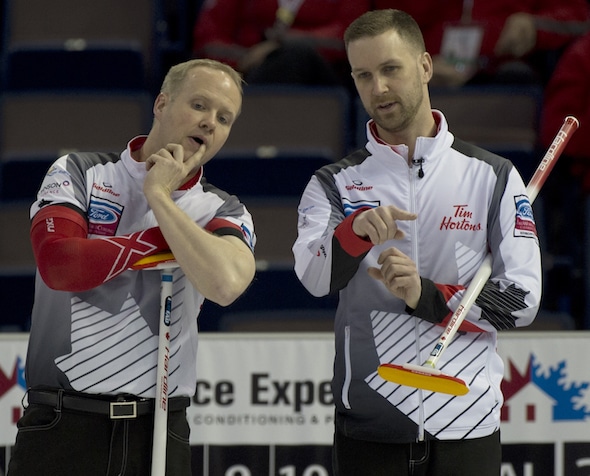 A first-end deuce, followed up with an immediate steal of four in the second end, were more than enough to propel Brad Gushue’s St. John’s, N.L., team to an 11-3 win over Russia’s Alexey Stukalskiy.

“I think it’s a bit of a confidence boost after yesterday,” said Gushue, who was scored at a perfect 100 per cent in the win. “The first five ends (against Switzerland on Saturday), we struggled pretty bad, but over the last 11 ends, we’ve been playing pretty good, so going into that game, I think we feel a little bit better about the ice, about how we feel, about how we’re throwing, which is a good sign.”

It was Gushue who engineered the first-end deuce, tucking a beautiful draw behind a Russian guard, and when Stukalskiy couldn’t follow up with the runback, Gushue followed the same path as his first to get the pair.

Canada ramped up the heat in the second; Russia started the end trying to generate offence but couldn’t follow through, and spent the rest of the end unsuccessfully trying to bail out as the Canadians deposited rock after rock in the house behind cover.

In the end, Stukalskiy’s last-gasp raise attempt didn’t connect, leaving Canada with four counters in the rings, and from there it was simply a matter of time.

“That was good for us; we’re still trying to learn the ice, and the more reps we can get, the better,” said Nichols. “I thought we did a little better job today of communicating. I mean, we did a pretty good job yesterday, too. We’re just trying to build on that and make sure everyone is into every shot.”

The win set the stage for a highly anticipated early showdown on Sunday evening against Sweden’s Niklas Edin (1-0), who’s taken gold on at the past two Ford Worlds staged in Canada — 2013 in Victoria, B.C., and 2015 in Halifax.

Gushue, it should be noted, has an 11-2 career record over Edin, with Gushue prevailing 8-3 in their only meeting this season, the championship game of January’s Grand Slam Meridian Canadian Open in North Battleford, Sask. Interestingly, while Gushue was on the sidelines recovering from his hip/groin issues and Nichols was skipping in his stead, Edin was 4-1 this season against three-quarters of Team Gushue.

“They’re a great team, and certainly this week, it’s no secret that we’re probably the two favourites coming in on paper,” said Gushue. “So it’s going to be a big game. But it’s not a be-all, end-all game at this time in the week. There will be some losses, and certainly getting into that 1-2 (Page playoff) game is the goal.”

In the only other game on the ice Sunday morning, Japan’s Yusuke Morozumi also improved to 2-0 with a 9-6 win over Jaap van Dorp of the Netherlands (0-2).

The Ford Worlds continues on Sunday with draws at 2 p.m. and 7 p.m.