Peter de Cruz knew when his Swiss team arrived in Edmonton for the 2017 Ford World Men’s Curling Championship, presented by Service Experts, that there was more at stake for his country than just a world title. 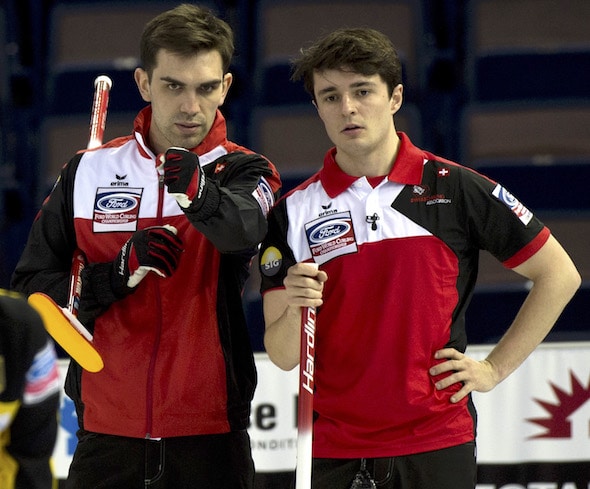 So, yes, those questions about his country’s pursuit of a berth in the 2018 Winter Olympics — the 2017 Ford Worlds will determine seven of the 10 teams that will compete in Pyeongchang — have perhaps grown a bit tiresome three days into the event.

“I think it’s going to be the same answer from us throughout,” said de Cruz with a patient smile on Monday morning at Northlands Coliseum. “Of course, we’re thinking about it, but I think we’re playing well enough to get to the playoffs, and that’s the goal. And then we  hope to have a good few games in the playoffs, and maybe get a medal.”

Based on his team’s four games to date, de Cruz’s confidence is well-placed. The Swiss improved to 3-1 on Monday morning with a tidy 7-4 win over Germany’s Alexander Baumann (1-3) to move into second place, tied with Sweden’s Niklas Edin — behind only undefeated Brad Gushue of Canada (3-0), who had the bye on Monday morning.

The combined results of the 2016 (in Basel, Switzerland) and 2017 world men’s championships will determine seven teams that qualify for the Winter Olympics, joining host South Korea. Two more teams will come out a last-chance qualifying event in December in the Czech Republic.

Sven Michel’s Swiss team finished ninth last year on home ice, and will need a much better result this year to qualify for Pyeongchang, although they’re helped by second-place Denmark and eighth-place Finland not having qualified for Edmonton, meaning those two countries can’t pad their point totals. (CLICK HERE for a look at the full standings).

A playoff berth will almost certainly nail down the Olympic spot for Switzerland, and the early returns are promising for de Cruz, who calls the game while throwing second rocks, fourth-rock thrower Benoît Schwarz, third Claudio Pätz and lead Valentin Tanner.

“We’re adapting to the ice,” said de Cruz. “It’s really fantastic ice, and we just have to keep going like we are now.”

Against the Germans, Schwarz made draws to score deuces in the first, fourth and sixth ends, and never really gave Germany a route back int the game as the Swiss stuck to their game plan of applying pressure.

“We were ahead from the start and we said we’re just going to keep playing offensive because we know that against the top teams, Canada, Sweden, Norway, we’re going to have to play an aggressive game,” said de Cruz. “It’s all preparation for the rest of the competition.”

In other games on Monday morning, John Shuster of the United States improved to 2-2 with an 8-6 win over Italy’s Joel Retornaz, with a 10th-end deuce providing the winning margin; China’s Rui Liu made a 10th-end double-takeout to score two for a 9-7 win over Scotland’s David Murdoch, leaving both teams with 2-2 records; and Edin’s Swedes scored four in the ninth end for an 8-6 win over Norway’s Steffen Walstad (2-2).

In addition to Canada, Japan’s Yusuke Morozumi (2-1), Jaap van Dorp of the Netherlands (0-3) and Russia’s Alexey Stukalskiy (0-3) had byes on Monday morning.

The Ford Worlds continue on Monday with draws at 2 p.m. and 7 p.m.