EDMONTON – A lot of the heavy lifting has been completed for Canada’s Brad Gushue in his search for his first gold medal at the Ford World Men’s Curling Championship, presented by Service Experts. 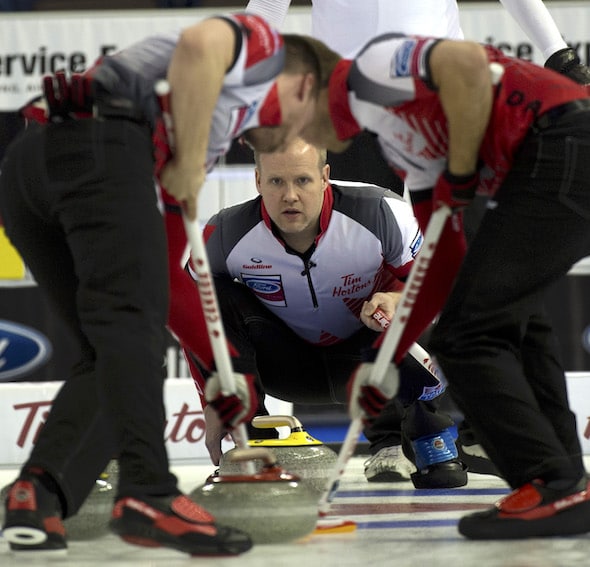 Gushue pulled off his second seven-end 8-2 victory of the day when he defeated John Shuster of the United States Monday evening. Gushue, third Mark Nichols, second Brett Gallant, lead Geoff Walker, alternate Tom Sallows, team coach Jules Owchar and national coach Rick Lang took care of Scotland’s David Murdoch by the same score in the afternoon draw. That leaves Canada out in front of the pack at 5-0. Many observers thought the first five games on the schedule would be Gushue’s toughest stretch since it included the likes of tour heavyweights and world championship veterans Niklas Edin of Sweden, Peter de Cruz of Switzerland, Murdoch and Shuster, the latter two making their seventh appearance in the worlds.

Gushue fired the first big shot against Shuster scoring three in the first end. But the outcome wasn’t really decided until Canada stole three in the sixth end. Facing four Canada counters, Shuster failed to execute a hit-and-stick to get his single but rolled out instead to give up the steal of three. He then surrendered another in the seventh, prompting him to shake hands. “I thought we came out nice and sharp in the first end with some intensity and I think the three (in the first end), we kind of let our guard down and played a little bit sloppy after that,” said Gushue. “I didn’t get a sense from John they were into it, too. It was just one of those lax games. When you play 11 games in a round robin you’re bound to get games like that and I’m not surprised or shocked by that. The key for us tomorrow is whoever we play in the afternoon (China’s Rui Liu, 3-2) is to come out and have that intensity that we’ve had for four games and one end.” Nursing a hip problem all season long, Gushue was glad to see his team of therapists get out of their home base of St. John’s, N.L., following a snowstorm. They’ve helped Walker as well with the shoulder injury he’s dealing with. “It’s not a concern,” said Gushue. “I feel better. Similar to the Brier I’ve gotten better as the week’s gone on since they came here (Sunday) morning.” Sitting right behind Canada in the standings are Sweden and Switzerland at 4-1. After a first-draw loss to Canada on Saturday, the Swiss have rolled off four consecutive wins. Monday night they put up field goals in the first, third and fifth ends for a 9-2 six-end victory over winless Russian (0-5) skipped by Alexey Timofeev.

“We were prepared for a difficult game against Canada (on Saturday) so we knew even if we lost it wasn’t the end of the world. And that if we just played our game we knew we had a good chance against all the teams here,” said de Cruz, who calls the game and throws second stones while Benoît Schwarz throws the fourth rocks. “It was just one game out of 11. We’ve been playing better and better. There’s just a few things we have to adjust but overall I’m happy where we’re at right now. “We’re playing a very aggressive game. Whenever we have a chance for a deuce we’re making it most of the time. Benoît’s been really good. If he can keep throwing like he is we’re going to win some games.” In Draw 8’s other games, Japan’s Yusuke Morozumi kept pace by beating Alexander Baumann of Germany 7-4 and Italy’s Jules Retornaz cruised past  Jaap van Dorp of the Netherlands 13-6. Japan, Italy, China and Norway are in a four-way tie for fourth. The Germans fell to 1-4 while the Dutch are 0-5. Besides second-place Sweden, other teams with the draw off were China, Norway’s Steffen Walstad (3-2) and Scotland’s David Murdoch (2-3). The Ford Worlds continue Tuesday with draws at 9 a.m (all times MT), 2 p.m. and 7 p.m. For ticket and other event information, visit httphttps://www.curling.ca/2017worldmen/ This story will be posted in French as soon as possible at https://www.curling.ca/2017worldmen/?lang=fr TSN (RDS2 in French), the exclusive television network for Curling Canada’s Season of Champions, will provide complete coverage of the