U.S. bounces back with crucial win at Ford Worlds

It was a humbling Monday night at Northlands Coliseum for John Shuster’s United States team at the 2017 Ford World Men’s Curling Championship. 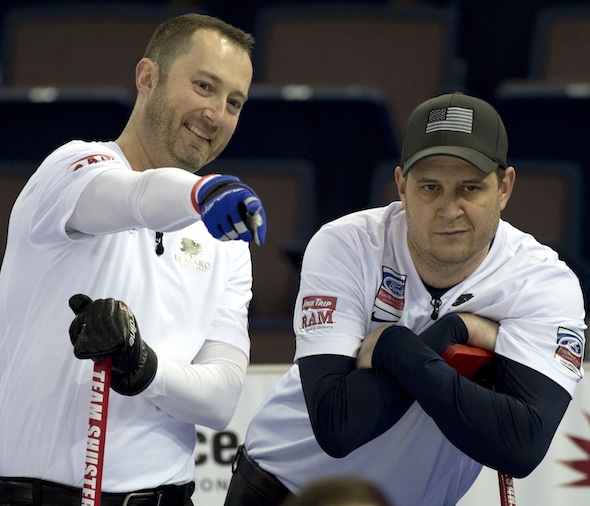 An 8-2 loss to Canada’s Brad Gushue did not have Shuster’s team — vice-skip Tyler George, second Matt Hamilton, lead John Landsteiner, alternate Joe Polo and coach Phill Drobnick round out the squad — in an especially terrific mood heading back to the hotel late Monday evening.

But the perfect remedy was found on Tuesday morning — an emphatic 9-3 win over Norway’s Steffen Walstad that left both teams with 3-3 records, just as importantly, got them back in a more positive head space.

“It was extremely important to come back that way,” said Shuster, who skipped this team to a bronze medal at the 2016 World Men’s Championship in Basel, Switzerland. “I mean, it was all shots that I missed that cost us (against Canada). Based on how the game was played, it should have been a really tight game and it ended up being a blowout, and that was completely on me. But today, I made a couple really delicate shots and some hard ones as well, it was good to go out there and throw some good rocks.”

Shuster, as he noted, struggled on Monday night with some ill-timed misses. But he came up big against Norway; never more so than in the fifth end when he connected on a wonderful double takeout to score a game-changing four, and his team never looked back.

While he left the rink not particularly happy, he was able to put the loss behind him in fairly short order, he said.

“I actually slept fine,” said a smiling Shuster, who’s making his seventh appearance at the world men’s championship. “Truthfully, that’s the one thing I’ve always been able to do — I’ll get down on myself a little bit immediately after the game, but then I’m able to park it because I realize that curling is a game, and it’s easy for me to park it when I look up in the stands and get to see my two kids and my wife afterwards.”

That perspective clearly helped on what Shuster considers an important day for the U.S. playoff hopes in Edmonton.

“Today’s a big day for us, playing two teams with two losses,” said Shuster, whose team will be back on the ice Tuesday at 7 p.m. (all times MT) against Japan’s Yusuke  Morozumi (3-2). “We looked at the standings board and we said, ‘Well, this looks like Saturday at the Masters — it’s moving day.”

In addition to Canada, Japan’s Yusuke Morozumi (3-2), Jaap van Dorp of the Netherlands (0-5) and Russia’s Alexey Stukalskiy (0-5) had byes on Tuesday morning.

The Ford Worlds continue on Tuesday with draws at 2 p.m. and 7 p.m.