Canada turns back Germans to close in on playoffs

EDMONTON – With a perfect record through the first four days of the 2017 Ford World Men’s Curling Championship, presented by Service Experts, Brad Gushue could be forgiven for looking ahead to the playoffs. 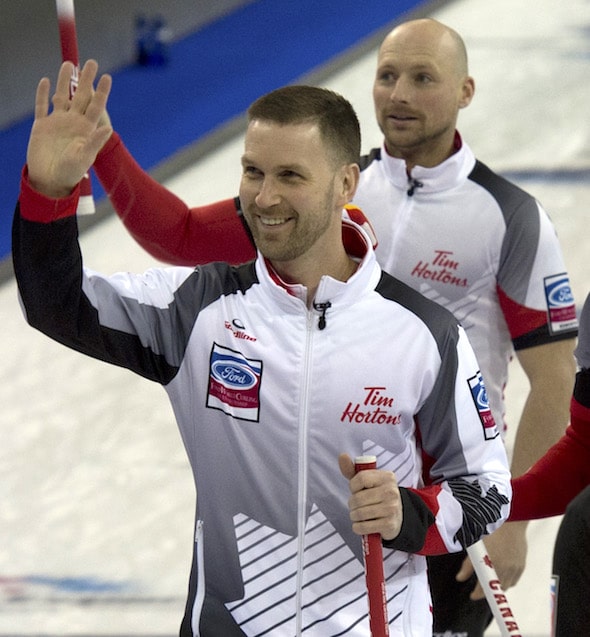 But those will come soon enough for the first-time Ford Worlds skip. He’s happy to keep soaking it in. Gushue’s Canadian squad from St. John’s, N.L., improved to 7-0 by breezing by Alex Baumann of Germany 8-2 in six ends Tuesday night. “Not yet,” said Gushue of being anxious for Friday’s 1-2 Page playoff game — two wins by Team Canada on Wednesday (vs. the Netherlands at 9 a.m. MT and Japan at 2 p.m.) would clinch a berth. “It’s fun, I want to enjoy the next couple of days. Friday and Saturday and Sunday will come quick enough and intense enough.

“The next couple of days we’ve still got to get another couple of wins where we lock up the 1-2 spot and hopefully the hammer so we’ve still got work ahead. I don’t want to wish days away. This is my first world championship, we’re having a ton of fun so we want to enjoy it.” Enjoy it he did Tuesday night. A boisterous bunch of partisan spectators seated in the stands next to the sheet they were playing on fired verbal volleys at the Germans and cheering Canadian shots and jeering German misses. “That was a good game, that was a lot of fun,” said Gushue, who was supported by third Mark Nichols, second Brett Gallant, lead Geoff Walker, alternate Tom Sallows, team coach Jules Owchar and national coach Rick Lang. (Sallows replaced Walker for the sixth end.) “I mentioned in the earlier game I didn’t think we were flying on all cylinders but that one we did. I thought we all played well and were sharp, and certainly the crowd was a lot of fun. We kind of got behind that and were kind of riding their enthusiasm. “Mark seemed to be engaged with them quite a bit and he played great, so hopefully we’ll see those guys and girls throughout the week.” Despite Canada’s perfect pace in the standings Sweden’s Niklas Edin and Peter de Cruz of Switzerland are still nipping at Gushue’s heels at 6-1. The loss dipped Germany to 2-5. German lead Ryan Sherrard, who hails from Saint John, N.B., but is currently studying for a doctorate in cellular and molecular biology from a Munich university, laughed when asked if his first game against his home country lived up to his worst expectations. “We knew coming in it was going to be a tough game,” said Sherrard, who skipped the 2004 Canadian junior men’s championship team. “They’re such a strong team. It’s David and Goliath. Now that we’ve played them I can sit back and genuinely cheer for them the rest of the way without any guilt.

“I was cheering for them the whole Brier. I was watching every game.back in Germany over the Internet and was just cheering the guys on. I played against Brett a lot in juniors and was just happy to see them with all their success.” He admitted Tuesday’s game was quite surreal for him. “Yeah, especially being Canadian and having the crowd against me jeering,” he laughed. “I’ve just never experienced that in a curling game.” On the bright side, a win over China earlier Tuesday gave the Germans two wins, one more than last year. Switzerland stayed on course by subduing a stubborn Netherlands squad skipped by Jaap van Dorp 9-6. The Dutch are 0-7 as is Russia, skipped by Alexey Timofeev. Joel Retornaz of Italy improved to 4-3 by beating the Russians 9-5. Joining the Italians in a three-way tie for fourth place at 4-3 are Japan and the United States after the Americans, skipped by John Shuster shaded the Yusuke Morozumi’s Japanese squad 7-6  in an extra end. Teams with byes on Draw 11 were Sweden, Scotland (David Murdoch, 3-4), China (Rui Liu, 3-4) and Norway (Steffen Walstad, 3-4). The Ford Worlds continue Wednesday with draws at 9 a.m., 2 p.m., and 7 p.m. (MT) For ticket and other event information, visit httphttps://www.curling.ca/2017worldmen/ This story will be posted in French as soon as possible at https://www.curling.ca/2017worldmen/?lang=fr TSN (RDS2 in French), the exclusive television network for Curling Canada’s Season of Champions, will provide complete coverage of the 2017 Ford Worlds.