EDMONTON – Job No. 1 is done for Canada’s Brad Gushue and his Canadian squad at the 2017 Ford World Men’s Curling Championship, presented by Service Experts. 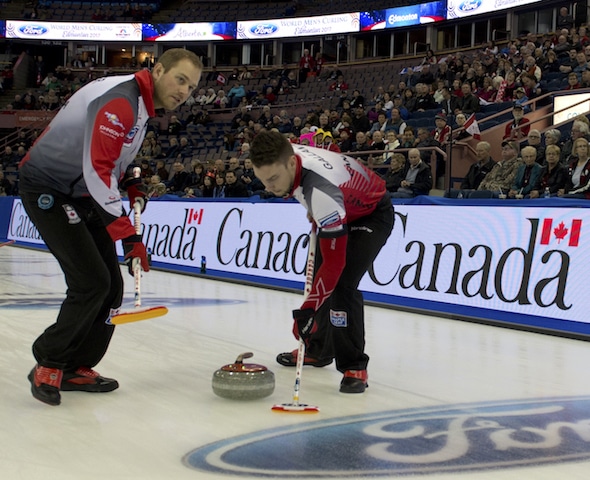 “We’re playing well. We are playing well,” Gushue admitted sheepishly. “Obviously we’ve had some cooperation in missing some shots, but we are playing good. “This is as good as the team has ever played for this long a stretch for a while. We’ve had better games in shorter stretches in like two or three games in a row, but to have nine games in this fashion – well, I guess eight because the first one (versus Switzerland) was tough – but certainly eight in a row like this is impressive.” Canada’s final two games will be Thursday against Italy (9 a.m. MT) and Norway (7 p.m.) as the Gushue gang will be seeking to secure the hammer for Friday’s playoff game. “We want to make sure we have the hammer so we’ve got to have a good day (Thursday) and then get ready for the playoffs,” said Gushue. “Hopefully tomorrow we get a good test to see what the ice is like in (ends) eight, nine and 10. Obviously we’ve seen it in a couple of games earlier this week, but the ice has evolved and improved as the week has gone on. It’s definitely going to be a bit different than what it was when we play Switzerland (on Saturday) or Sweden (Sunday).” Thursday’s game was basically decided in the fourth end when Gushue executed a short raise takeout to score five for a 7-1 lead. “They were taking chances early in the end that I didn’t think they needed to take and kind of left our rocks kicking around,” said Gushue. “No matter where he went, we were going to be able to get at him for the last shot and we made it for five. “I just thought there were a couple of strategy errors early in the end to leave some rocks around that he didn’t necessarily have to when he was only down 2-1.” Only two of Canada’s games have gone the distance and those were against the two teams on their tail. That would be Sweden’s Niklas Edin and Peter de Cruz of Switzerland. Both are 7-1 heading into their match against each other tonight. Canada has outscored its opponents 77-29 and have had 21 ends conceded by the other team.

Gushue doesn’t believe the St. John’s, N.L., team will have trouble turning up the intensity in tight games if they need to. “When you look at what our team has done at the Brier or on tour, we’re typically a team that’s one-up with coming home, or tied up with coming home or two up without. That’s how we win the majority of our games,” said Gushue. “This is a little bit unfamiliar territory to have this many lopsided games. It’s certainly nice because of the grind we had at the Brier to get here and how we were feeling physically at the beginning of the week. We had to make up some ground on the rest of the teams and I think we did that by having 21 less ends.” Canada is endeavouring to capture the gold medal in both the CPT World Women’s Championship, presented by Ford of Canada, in Beijing, won by Rachel Homan, and the Ford World men’s for the first time since 2008 when Jennifer Jones and Kevin Martin accomplished the feat. Canada has done that 11 times before. Between Homan and Gushue, and dating back to Kevin Koe’s gold-medal triumph last year in Basel, Switzerland, Canadian teams have won 26 consecutive games at the world level. The loss left Morozumi, third Tetsuro Shimuzi, second Tsuyoshi Yamaguchi, lead Kosuke Morozumi, alternate Kohsuke Hirato and coach Hatomi Nagaoka at 5-4. They conclude play Thursday against Switzerland and China’s Rui Liu (4-4). The de Cruz crew set up tonight’s second-place showdown with Edin by downing a stubborn Italian squad skipped by Joel Retornaz 6-4. Italy dropped to 4-4. John Shuster of the United States holds down the fourth and final playoff spot at 5-3 after defeating Germany’s Alexander Baumann 8-5. The Germans are 2-6. In a battle of winless squads, Jaap van Dorp of the Netherlands came out victorious by downing Russia’s Alexey Timofeev 6-4. The Dutch are 1-8 while the Russians are 0-9. Besides Sweden, other teams that did not play in Draw 13 were China, Norway (Steffen Walstad 3-5), and Scotland (David Murdoch, 3-5). The Ford Worlds continue Wednesday with a draw at 7 p.m. (MT) and Thursday with draws at 9 a.m., 2 p.m., and 7 p.m. (MT) For ticket and other event information, visit httphttps://www.curling.ca/2017worldmen/ This story will be posted in French as soon as possible at https://www.curling.ca/2017worldmen/?lang=fr TSN (RDS2 in French), the exclusive television network for Curling Canada’s Season of Champions, will provide complete coverage of the 2017 Ford Worlds.