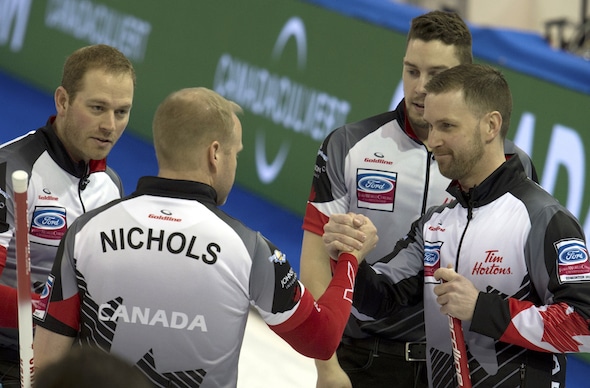 Gushue’s team from St. John’s, N.L., did it by scoring five in the fourth end to down Italy, skipped by Joel Retornaz, 9-2 Thursday morning. That not only puts Canada into the 1-2 Page playoff game Friday (7 p.m. MT) it gives Gushue the first-end hammer. Although there are two draws remaining, Canada will be joined in the playoffs by Sweden’s Niklas Edin (8-1), Peter de Cruz of Switzerland (8-2) and John Shuster of the United States (7-3). Who will play Canada on Friday and who plays the 3-4 game is still to be determined.

Canada has rolled through its opposition in winning all 10 of its games by a combined score of 86-31. Gushue, third Mark Nichols, second Brett Gallant, lead Geoff Walker, alternate Tom Sallows, team coach Jules Owchar and national coach Rick Lang will play their final round-robin game tonight against Steffen Walstad of Norway (4-5). “Hopefully we continue to play that way and if we do it’s going to be a hell of a game to beat us. But that’s not to say that’s not going to happen,” said Gushue. He believes the success is indicative of not only how well he and his teammates have been playing but misses by other teams. “Obviously we’re not making everything, but when we do miss a shot we come back with a great shot and make up for it so we’re not digging ourselves into any holes,” said Gushue. “I certainly like the way we’re throwing, I like our attitude, we’re focusing on every shot. “This week has been a little odd for us having these lopsided games. It just comes down to how well we’re playing and getting some misses from the other guys.” Only two of Canada’s games have gone 10 ends as the opposition has shortened the workload by 25 ends with handshakes. With Gushue (hip) and Walker (shoulder) nursing injuries and the toll the long season is taking, the short games are a bit of a blessing. “We haven’t depleted our tanks like we normally would, which is great. We’re feeling good. I don’t think being tired or fatigued is going to be an issue this week,” said Gushue. Canadian men have gone unbeaten, including playoffs, 10 times at the Ford Worlds. The last time Canada didn’t lose en route to winning gold was 1995 when Winnipeg’s Kerry Burtnyk did it in Brandon. An additional eight times Canada has gone unbeaten in the round robin but lost in the playoffs, the last time being in 2004 when Nova Scotia’s Mark Dacey losing to Germany’s Sebastian Stock, who was 6-3 in the round robin, in the semifinal in Gävle, Sweden. Duplicating Burtnyk isn’t a goal of Gushue’s.

“I’m 100 per cent genuine when I say I don’t care about it. When I look back at all the Briers and worlds I couldn’t tell you anybody’s records. All that really matters is that your name is on the trophy,” said Gushue. “If we have some adversity and lose tonight, or tomorrow night and we win, I’ll take it. It really doesn’t matter how we get there. Winning on Sunday is the main thing.” Retornaz, even with the bushy beard he now sports, is a familiar face to Gushue. As a 22-year-old Retornaz skipped the hometown Italian team to a win over Gushue at the 2006 Winter Olympics in Torino where Gushue won gold. Despite some efforts by the media, it was “by no means revenge at all” for that loss, said Gushue. “As Joel and I talked about it, we walked away with the gold medal, he walked away with the win. We were both happy. It didn’t really pop into my mind at all,” said Gushue. Retornaz throws third rocks while Amos Mosaner throws fourth. They are backed by second Andrea Pilfer, lead Daniele Ferrazza, alternate Simone Gonin and coach Jean Pierre Rütsche. They are 4-6 and will play their final game against Norway (2 p.m.). Switzerland booked its ticket to the playoffs by eliminating Japan’s Yusuke Morozumi. Fourth rock thrower Benoît Schwarz made a takeout with his final shot to edge Morozumi 6-5 dropping Japan’s record to 5-5. The Swiss sit third at 8-2. Shuster had to execute a double takeout with his final throw to barely get by Netherlands (1-9) 6-5. The Americans’ final round-robin game is against Sweden (2 p.m.) while Switzerland plays China. In the final draw, Sweden will play Netherlands. In Draw 15’s other game, Germany’s Alexander Baumann improved to 3-7 by downing Russia skipped by Alexey Timofeev 9-7. Russia is winless in 10 games. Sweden, China (Rui Liu, 4-5), Norway (Walstad, 4-5) and Scotland (David Murdoch, 4-5) did not play in Draw 15. The Ford Worlds continue Thursday with draws at 2 p.m., and 7 p.m. (MT) For ticket and other event information, visit httphttps://www.curling.ca/2017worldmen/ This story will be posted in French as soon as possible at https://www.curling.ca/2017worldmen/?lang=fr TSN (RDS2 in French), the exclusive television network for Curling Canada’s Season of Champions, will provide complete coverage of the 2017 Ford Worlds.