EDMONTON – Brad Gushue has a chance to give his country an achievement it hasn’t reached in 22 years. But more importantly, he has a shot at a huge first for himself and his Canadian teammates. 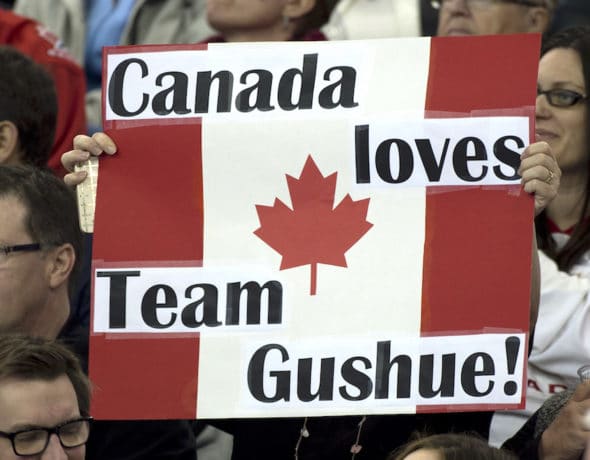 After almost a decade and a half of chasing his curling dreams, Gushue will play for his first Ford World Men’s Curling Championship gold medal Sunday. He reached the 2017 final with a methodical 7-4 dismantling of Sweden’s Niklas Edin in the Page 1-2 playoff game Friday night at Northlands Coliseum. It’s a formula Canada has used with devastating efficiency all week in racking up 12 wins and no losses. Friday’s game was just the third time all week Canada was required to play 10 ends.

“Obviously it would be really nice to finish it off here, but we’ve shown we’ve had a pretty good week, and coming off especially what we did in St. John’s (at the Tim Hortons Brier) to come and be 12-0 is impressive. But we’re not going to settle with that. We want to win Sunday night,” said Gushue. “12-0 really doesn’t matter unless you win Sunday. “That’s the key for us. If we go out and have a good game, we can walk out with our heads held high. The nature of curling is sometimes guys curl 96 when you play 95. We don’t have control over whether we win or not, but we do have control over who we play.” The Gushue team of third Mark Nichols, second Brett Gallant, lead Geoff Walker, alternate Tom Sallows, team coach Jules Owchar and national coach Rick Lang will be bidding not only for gold but also to become the first Canadian men’s squad to go unbeaten, including playoffs, at the Ford Worlds since Winnipeg’s Kerry Burtnyk did it in Brandon, Man., in 1995. Ten Canadian teams, including Burtnyk, have accomplished the feat, but none in the 12-team era, meaning the 13-0 potential record would be a first. The victory extended Canada’s win streak at the men’s and women’s world championships to 29 with the 12 wins here, the 13-0 record by Rachel Homan in winning the women’s world title in Beijing last month and Calgary’s Kevin Koe winning his last four games to take the 2016 world men’s title in Basel, Switzerland. To go along with his 2006 Olympic gold medal, Gushue has a shot at adding the Ford World title to the first Tim Hortons Brier he finally managed to win in his hometown of St. John’s, N.L., last month. Finishing first in the round robin with an 11-0 record gave Gushue the hammer in the first end but he had to draw near the edge of the button just to score one. However, Canada took control with single steals in the second and third ends thanks to Edin sliding too far, first of all with a draw in the second and on a takeout in the third. “It was a difficult draw (in the second end), I wasn’t sure about the speed and when we missed that to go down 2-0, it’s uphill from there,” said Edin. “But then we played a solid game, it’s just those early points didn’t go our way, it went their way instead, that changes the game.” Although Edin managed to pick up a single in the fourth and a steal in the sixth – only the second stolen end Canada has surrendered at the championship – the game was decided in the seventh when Gushue executed a soft pick of a Swedish stone to score three and the Northlands Coliseum crowd erupted into a long, loud cheer. Sweden managed to pick up a pair in the eighth end to narrow the deficit to 6-4 before Canada got one in the ninth and then ran Sweden out of rocks in the 10th.

“Once we got the steal in the second we really felt we were in control of the game,” said Gushue. “You have to be careful anytime you play a good team that when you get up you can’t expect to run away with it against a team like Niklas. They’re going to keep making some freezes and making some good shots. You try and leave yourself some good angles so you always have a shot. We didn’t do a good job of that in the sixth end, but overall I thought we played very well and kept their chances down to a minimum.” Even though his front end played well, Edin struggled through most of the match, registering a shooting percentage of 70. Gushue was 88 per cent while Nichols was 90, Gallant 93 and Walker 93. Canada is idle until the final Sunday (6 p.m.) and will await the winner of Saturday’s semifinal (7 p.m. MT). Edin, third Oskar Eriksson, second Rasmus Wranå, lead Christoffer Sundgren, alternate Henrik Leek and coaches Peja Lindholm and Frederik Lindberg will be one of the participants. The other will be the winner of the Page 3-4 playoff game Saturday (2 p.m.) between Switzerland’s Peter de Cruz and John Shuster of the United States. “I’m looking forward to the rest. It’s going to be valuable for us,” said Gushue, who plans to take in a movie and spend time with his family along with getting some practise in. “We’ve had so many games over the past few weeks that a day off is not going to hurt at all.” For ticket and other event information, visit httphttps://www.curling.ca/2017worldmen/ This story will be posted in French as soon as possible at https://www.curling.ca/2017worldmen/?lang=fr TSN (RDS2 in French), the exclusive television network for Curling Canada’s Season of Champions, will provide complete coverage of the 2017 Ford Worlds.