Swiss cruise into semifinal with decisive win over the U.S.

Peter de Cruz of Switzerland hung a bunch of deuces on the scoresheet Saturday, jumping on erratic play of John Shuster of the U.S., to take an 11-4, eight-end victory in the Page 3-4 playoff game at the Ford World Men’s Curling Championship, presented by Service Experts. 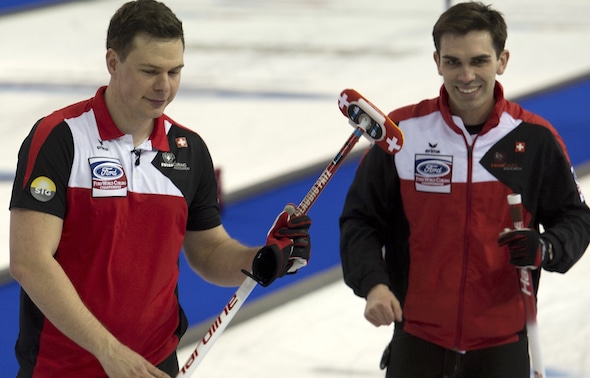 De Cruz, fourth-rock thrower Benoît Schwarz, third Claudo Pätz, lead Valentin Tanner, alternate Romano Meier and coach Claudio Pescia will now play Niklas Edin of Sweden in this evening’s semifinal at 7 p.m. “We want to make him throw tough shots,” de Cruz said of playing Edin. “We know that they can make anything. If we put the rocks in the right position and Niklas has really tough shots for one or two each end, that’s the way to go. If he makes the shot they’ll win, if we make our shots we’ll win.”

John Shuster’s U.S. team will look to bounce back in the bronze-medal game on Sunday. (Photo, Curling Canada/Michael Burns)

The winner of that game will meet unbeaten Brad Gushue of Canada in Sunday’s gold-medal game at 6 p.m. Shuster, third Tyler George, second Matt Hamilton, lead John Landsteiner, alternate Joe Polo and coach Phill Drobnick drop into Sunday’s bronze-medal game at 12 noon where they will play the loser of tonight’s semifinal. Switzerland jumped all over a series of U.S. misses to build a 6-3 lead through five ends and cruise to the surprisingly easy win. Deuces – three of them – had also carried the Swiss to a 7-4 win over the Americans in the opening day of the competition. Switzerland jumped on a Shuster miss in the first end to score two, but gave it back in the second. After Shuster’s first-rock draw slid right through the house, Schwarz failed to hide his hit-and-roll behind cover, leaving Shuster a routine hit-and-stick for his deuce.

When George’s hit-and-roll slid too far in the third it set up the end for Switzerland to get another deuce. And when Shuster’s last-rock draw came up short in the fourth, it gave de Cruz a steal of two. “From my first rock in the first end,” Shuster laughed when it was said he struggled today. “In the next end I’m throwing draw to lie three, put pressure on them. Let it go, felt good and the speed just wasn’t matching my feel. I couldn’t get it to the right place. “Then I had that one (in the fourth) that ran straight. Couldn’t sweep it until it got by the guard and it’s a steal of two That was the game. Can’t give up steal of twos against team like this.” Shuster, who shot just 63 per cent on his draws, did make a pressure draw to the button against four Swiss counters in the fifth. Things didn’t get any better for the U.S. A hog-line violation by George with his second stone opened the door for another deuce by de Cruz and a commanding 8-3 lead. The Swiss put up three more in the eighth to end the game. “A good team performance,” said de Cruz. “One or two things to readjust to really have a good chance (tonight). If we can correct that and keep the good attitude on the ice, we have a good chance. “Our back end played really well.  Ben made every shot so if he plays like that again, I like our chances.” Switzerland and the U.S. finished the round-robin with identical 8-3 records behind Canada at 11-0 and Sweden at 9-2. For ticket and other event information, visit httphttps://www.curling.ca/2017worldmen/ This story will be posted in French as soon as possible at https://www.curling.ca/2017worldmen/?lang=fr TSN (RDS2 in French), the exclusive television network for Curling Canada’s Season of Champions, will provide complete coverage of the 2017 Ford Worlds.