It was the lucky seven for Peter de Cruz and his Swiss teammates Sunday. The foursome broke open a tight game with four in the seventh end to defeat John Shuster of the U.S. 7-5 to capture the bronze medal at the Ford World Men’s Curling Championship, presented by Service Experts. 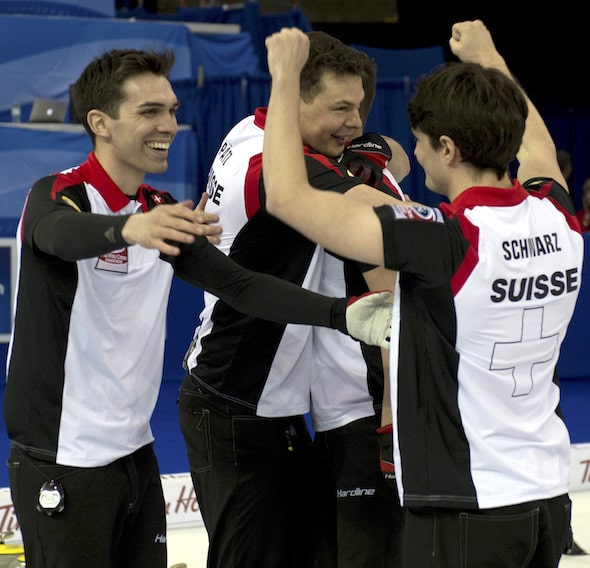 “It was all about ice reading,” de Cruz said of the pivotal seventh end. “I think the ice just changed a little bit, got really faster. We managed to control that a bit better than them. A few big mistakes they made and that allowed us to score.” After patiently blanking two ends, Switzerland got rewarded in the seventh when they managed to clog up the house, with 10 stones in play for skip rocks. Shuster was facing four Swiss counters and when his last-rock long runback got only one, Benoît Schwarz, throwing fourth stone for Switzerland, had an easy hit and stick for four. “We got heavy on a few draws and they made some good save shots,” Shuster said of the end. “Honestly, if my last one curls a quarter inch less they draw for one. That’s what curling is

“To be able to win six in a row (in the round robin) and get to the playoffs again was great but obviously hugely disappointing playoff.” De Cruz, Schwarz, third Claudo Pätz, lead Valentin Tanner, alternate Romano Meier and coach Claudio Pescia gave up a steal in the first end but countered with two in the second. Then they just played a patient game until they got the big breaks in seven. “We played well throughout the game,” said de Cruz “The first half we didn’t put the rocks exactly where we wanted. We did in the seventh and that was the end.” Schwarz said the bronze medal is a major accomplishment for the young team after a different Swiss squad finished 4-7 in the 2016 worlds and didn’t make the playoffs, despite playing on home ice in Basel, Switzerland. “We feel very awesome,” he said. “I have to say it’s a relief because it was a week with a lot of pressure. We had to qualify for Olympics and we wanted to do well. It was a great week. We had a lot fun with the fans and volunteers, it’s a week we will remember for many years.” In the gold-medal game at 6 p.m. MT, Canada’s Brad Gushue will be seeking his first world title when he plays two-time champion Niklas Edin of Sweden. Switzerland had beaten Shuster, third Tyler George, second Matt Hamilton, lead John Landsteiner, alternate Joe Polo and coach Phill Drobnick 11-4 in the Page 3-4 game on Saturday.

Swiss fans had plenty to cheer about on Sunday. (Photo, Curling Canada/Michael Burns)

Switzerland and the U.S. finished the round-robin with identical 8-3 records behind Canada at 11-0 and Sweden at 9-2. “It’s not a surprise that the top three teams on the order of merit are on the podium,” said de Cruz. “We’re happy with where we are and now we have to learn how to beat the very best.” For ticket and other event information, visit httphttps://www.curling.ca/2017worldmen/ This story will be posted in French as soon as possible at https://www.curling.ca/2017worldmen/?lang=fr TSN (RDS2 in French), the exclusive television network for Curling Canada’s Season of Champions, will provide complete coverage of the 2017 Ford Worlds.