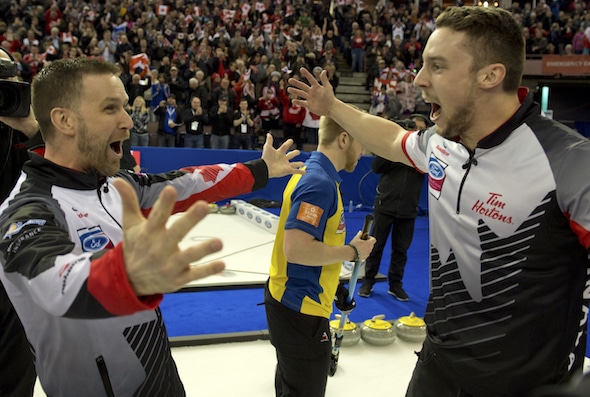 It was a gold-medal celebration for Brad Gushue, left, and Brett Gallant. (Photo, Curling Canada/Michael Burns)

“Awesome, awesome,” an emotional Gushue said after the victory completed an unbeaten run through the championship. “Our team played so incredibly well all week. I need to give my team credit, that was a pretty dominating performance for the whole week. “And what a heck of a game. Niklas threw everything he had at us and we had to play our best to win. I’m so proud of my team the way they played.” The veteran St. John’s, N.L., skip has now won the world junior title, the Olympic gold medal, the Tim Hortons Brier and the men’s world championship, the first skip ever to win all four. While it took Gushue 14 tries to win his first Tim Hortons Brier last month, he won the world title in his first appearance. Gushue, third Mark Nichols, second Brett Gallant, lead Geoff Walker, alternate Tom Sallows, team coach Jules Owcher and national coach Rick Lang went through the championship unbeaten at 13-0. Easily the class of the field here, they went 11-0 in the round robin and then beat Edin, a two-time world champion, in the Page 1-2 game and Sunday’s final. “This is unbelievable,” said Nichols. “This whole team has put in so much work all year. Oh man, I’m so proud to be a part of this team. “I don’t think we could ever imagine going on a run like this against the best in the world.” The gold medal also officially qualifies Gushue for the Tim Hortons Roar of the Rings Canadian Curling Trials in Ottawa in December — the event that will determine Canada’s four-player teams for the 2018 Winter Olympics in Pyeongchang, South Korea; Gushue won gold for Canada at the 2006 Winter Olympics in Torino, Italy. It’s a far cry, said Gushue, from last fall when a hip injury prevented him from beginning the season with the team. “It’s hard to believe,” he said. “To see where I was in November, December and even parts of January, to be here, world champion, it’s incredible.” The game was as tight as expected with neither team able to capitalize on the few miscues made. After a blank first end, they took turns forcing each other to take singles for four ends, with the best chance to get a two coming in the fourth. Gushue, arguably the best male skip in the world the past month, had that chance with his final stone but on the hit his shooter rolled just inches too far and he had to settle for a single. Gushue regained the hammer in five and after blanking three ends when Canada couldn’t get the right set-up for multi scores, he finally got the chance he was waiting for in the ninth. Canada got two shot stones inside the four-foot and when Edin rolled half an inch too far with his last-rock hit and roll, that left Gushue to draw the four foot for two. 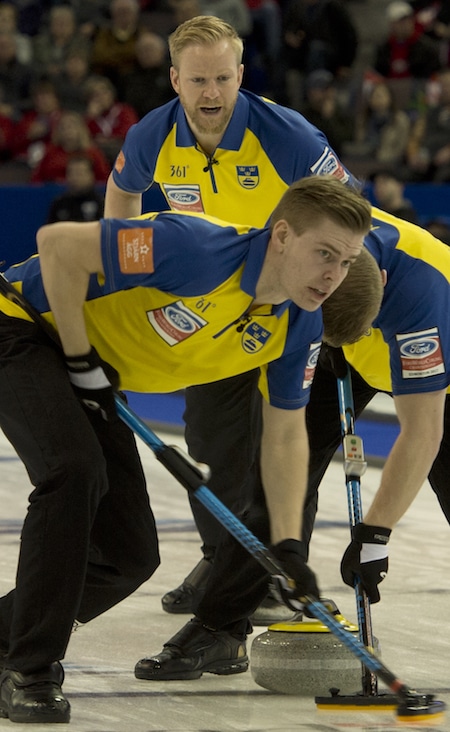 In the 10th Gushue made a clutch wide double to eliminate two Swedish stones. With his final shot he punched Edin’s last hope through a narrow port and out the back of the house to secure the victory. “It was a good game plan,” Edin said. “We got a little short on time and didn’t take enough time to figure out the ice once the frost came up. We missed a few shots in the ninth end and the 10th but we still had a good event to make the final.” The win was Canada’s second straight world men’s title and the 36th since the world championship began in 1959. The Canadians swept the all-star positions. The all-stars are based solely on shooting percentage through the round-robin segment and Gushue, Nichols, Gallant and Walker were the best at their positions. The Collie Campbell Memorial Award for sportsmanship went to the Netherlands lead Carlo Glasbergen after a player vote Attendance for the final game was 7,292, bringing the total for the championship to 85,214, not counting suites numbers. In the bronze-medal game earlier in the day Peter de Cruz and his Swiss teammates scored four in the seventh end to defeat John Schuster of the U.S. 7-5. This story will be posted in French as soon as possible at https://www.curling.ca/2017worldmen/?lang=fr