Many of Canada’s up-and-coming curling stars will get their first exposure to a national championship competition when the inaugural Canadian Under-18 Boys and Girls Curling Championships get underway in Moncton, N.B. 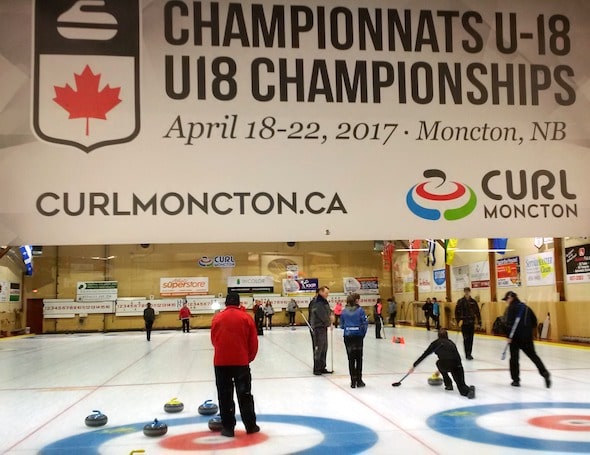 Many of the best young curlers in Canada will be in Moncton for the inaugural Canadian Under-18 Boys and Girls Curling Championships. (Photo, courtesy Curl Moncton)

The event, for players ages 17 and under as of June 30, 2016, will be hosted jointly by Curl Moncton and the Superior Propane Centre in Moncton, and will feature teams from 12 Member Associations in each gender (Nunavut and Yukon did not enter teams).

But while many of the players will be getting their first taste of a national championships, others will enter the championships with an abundance of national and international experience.

Tardi and Middleton also were members of the Canadian Youth Olympic mixed team that won a gold medal with Mary Fay and Karlee Burgess at the 2016 Winter Youth Olympics in Lillehammer, Norway, last season.

The Northern Ontario team, meanwhile, features skip Jacob Horgan and second Nicholas Bissonnette, who’ve finished on the podium the past two years at the Canadian Juniors (silver in 2016, bronze in 2017) on the team skipped by Jacob’s older brother Tanner.

Round-robin competition at both facilities will begin Tuesday at 11 a.m. (all times Atlantic).

Tyler Tardi, left, and Sterling Middleton will be looking to follow up on their win at the Canadian Junior Championships in January. (Photo, Curling Canada/Michael Burns)

“So many times at the U-21 level at the Canadian Juniors, you’re seeing how the experience of being older and more mature makes a difference, and it can be tougher on the younger players,” said Radford. “This championship gives those younger players a valuable opportunity to gain confidence against players closer to their own age group, and the confidence and experience they gain at the Under-18 Championships will prove invaluable as those players progress.”

Selected games from the Canadian Under-18 Championships will be streamed live for viewing on-line. Go to the event website, www.curling.ca/2017under18/, for links and more information.

The teams will be split into two pools of six in each gender. The top three teams in each pool will move into a six-team championship pool, and from there, the top four teams will go into the semifinals Saturday, April 22, at 1 p.m., with first playing fourth and second playing third.

The semifinal winners will then play for gold and silver, while the semifinal losers will play for bronze, at 5 p.m. Saturday, April 22.

Additionally, the teams that don’t make the playoffs will take part in a mixed doubles competition all day Saturday.

For information on team lineups, schedules and tickets, go to the event website: www.curling.ca/2017under18/.