When you think of curling families in Canada, names that come to mind might be the Howards, the Richardsons or even the Koes. However, there are a couple of young curlers on the East Coast of Canada looking to soon become household names. Justine and Brigette Comeau are sisters representing the host province this week at the inaugural Canadian U-18 Curling Championships taking place in Moncton, N.B. 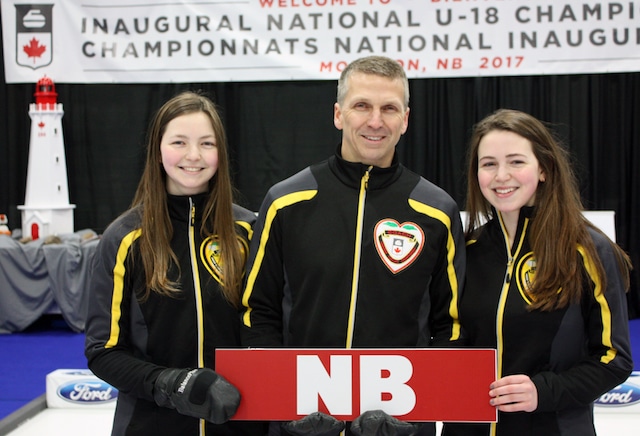 The sister act hails from Fredericton, which is the province’s capital located just a hop, skip and a jump away from Moncton. For the Comeaus, this is basically a hometown event. Not only are the girls getting to chase their athletic dreams together this week, but they also have Dad (Tim Comeau) in tow as the team’s long-time coach. While many siblings can take a long time to warm up to the idea of curling together competitively, Justine and Brigette jumped into being sisters and teammates at a young age and never once looked back. The two have earned 10 provincial championships together over the years and at just 18 and 17 years of age, the girls have already added national medals to their collections with bronze at the Canadian Juniors in 2016 and silver at the 2016 Optimist International Championship. Older sister Justine says that curling with her sister is just normal. “It’s definitely nice, because I know that no matter what happens, she’ll always have my back and that’s really rare,” says Justine, the skip. The girls have grown up on the curling ice together, and so has their relationship. “We have a very (kind of) joking relationship, that’s just kind of how we are so it just works and that’s just how we are all the time,” she says. “In our house, we just always talk about curling. My dad always has his coach mode on, there is always coachable moments, it’s just what I’m used to. We’re always the same and it works. Away from curling I know that he’s always gonna be my Dad and have my best interests at heart, so at the end of the day everything’s gonna be okay.” Brigette says playing at home is extra special this week. “It’s really nice, I know (Justine) so well and I know exactly how to play with her,” she says. “I couldn’t really imagine playing without her. It can be easy to step over that line of family and teammates but because we are so close, we get over it pretty quickly. Having them both (sister Justine and dad Tim) here, I really like it. It’s so nice, to do so much together as a family. It’s really special, that’s the only way to describe it really.”

For Dad, coaching his two girls makes life that much easier. “I get to be involved with both of them at the same time and I never have to spread my time,” he says. “It’s easy, and it’s great. You get to watch them grow up and you get to enjoy some of their best experiences with them. Justine skips and Brigette plays front end and it’s just like anyone else, so I’ve just learned how to help them in their own positions, whether it’s my kid or anyone else. I don’t think the coaching part is any different because it’s my kids.” For Tim, as a New Brunswicker, getting to watch his kids play at home is definitely a unique and rare experience. “We are really happy that this is in New Brunswick,” he says. “It’s nice to be home, it’s nice to know a lot of people and we know that we are at home. We haven’t seen the home crowd yet, but we will see it tomorrow (Wednesday) night. This experience is a stepping stone for us, towards the Canadian Juniors and the Worlds, wearing the maple leaf on their back. So as a coach I’m looking to see how they perform under these conditions, working towards our goals… but as a parent I’m proud of them for the hard work they put in, no matter how they do.” The New Brunswick foursome – which includes third Emma LeBlanc and lead Keira McLaughlin – is currently 2-0 and will look to keep the momentum rolling into their next round robin play on Wednesday evening. Competition continued on Wednesday morning, with Nova Scotia’s Ryan Abraham scoring a 6-2 win over Manitoba’s Brett Walter to stay undefeated in the Boys’ round robin. Quebec’s Gregory Cheal improved to 2-1 in the standings after an 8-2 win over Northwest Territories’ Lucius Lee, and Rylan Kleiter of Saskatchewan scored a single in an extra end for a 4-3 win over PEI’s Donald deWolfe. On the Girls’ side, Saskatchewan’s Rachel Erickson earned her first win, a 6-2 victory over Newfoundland and Labrador’s Mackenzie Glynn, while Ontario’s Kayla Gray handed Northern Ontario’s Kira Brunton her first loss. After Brunton stole a point in the eighth to tie, Gray scored a single in the extra end for a 7-6 win. The round robin continues on Wednesday with draws at 1 p.m. and 5 p.m. (all times EDT) For information on team lineups, schedules and tickets, go to the event website: www.curling.ca/2017under18/.