(Story by Cathlia Ward) After just four years of competitive curling, Nick Bissonnette of Northern Ontario has already attended three national championships – a pretty impressive record for anyone, especially considering many athletes train for decades for that one shot at a national title. This week, Bissonnette is playing second for Team Northern Ontario at the inaugural Canadian Under-18 Boys and Girls Curling Championships in Moncton, N.B., and his team remains in the hunt for playoffs after crossing over into championship pool play. 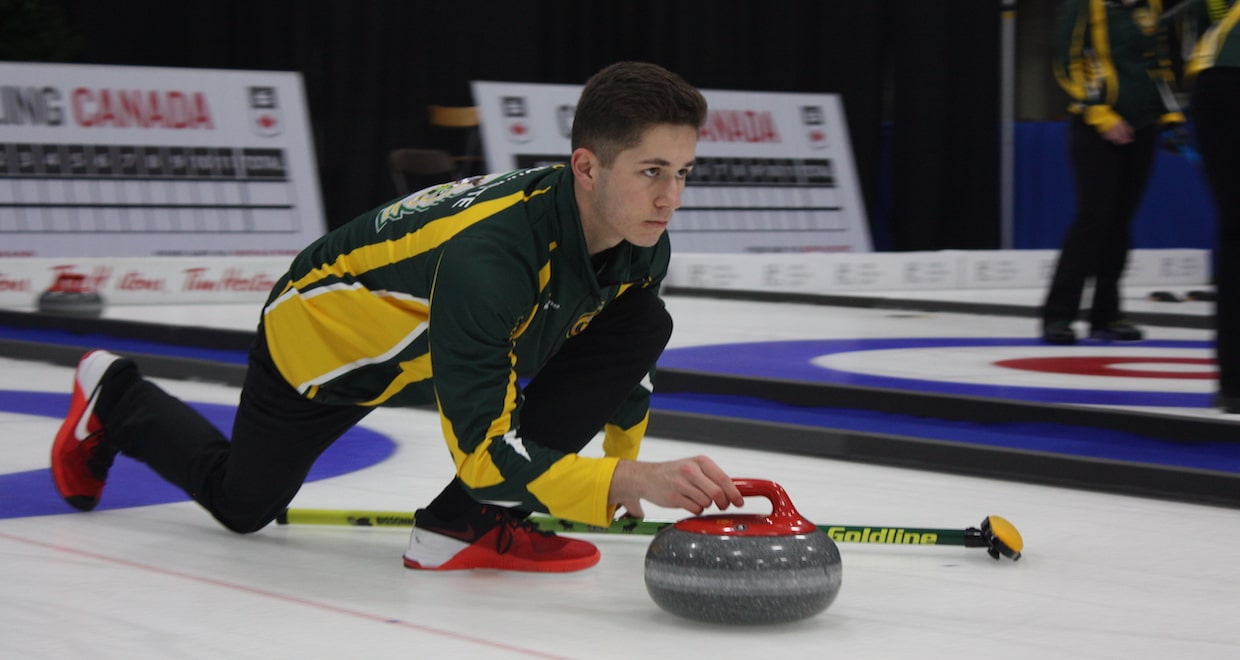 Bissonnette, a former hockey player, saw curling on TV and watched Brad Jacobs win the Brier only to turn around and win Olympic gold one season later. He says that motivated him. He wanted to see if he could do that too. “Dad and I joined the Sudbury club and I just practiced every day, just practiced as hard as I could,” says Bissonette during a break in the action in Moncton. “A year later, I joined a competitive team and after two years I got lucky enough to join Team Horgan. For the first year, I was totally on my own for the most part. I would just watch Brad Jacobs on TV and try and do what he did. I kinda slide like him today.” Coming from a hockey background, Bissonnette says the toughest part about curling wasn’t the physical demands of the sport but instead the mental aspect of the game. “Really, if you miss a shot, the recovery is probably the hardest part or even when your teammates miss, learning how to support them,” he says. “Coming from hockey, it’s surprisingly similar because I played goalie. I’m used to kind of being on my own and needing to make that big save all on my own and it’s very similar to when you’re the one throwing the rock and it’s all on you.” It didn’t take long for Bissonnette to be hooked on the game. “As soon as I tried it, I was hooked, I fell in love with the game,” he says. “Ever since then I’ve basically been practicing and playing every day, this is what I want to do.” Bissonnette says that having such a high-calibre team in Northern Ontario has taught him a lot about the game itself but also a lot about hard work and dedication. “I mean for me, I started kind of because of Brad Jacobs so yeah, I want to get to a Brier and an Olympics one day. They are like me, they always practice every day. When I talk to them they always tell me to keep at it and work hard, and don’t forget about both the on and off ice training.” Championship Round begins The first draw of the Championship round got underway on Thursday night, with the top six teams from the Boys and Girls round robin pool play moving on to the battle for playoff positions, while the rest of the field moved into the Seeding pool to determine positions for next year’s championship. On the Girls’ side of the Championship pool, the Alberta foursome skipped by Abby Marks knocked off front-runner Justine Comeau of New Brunswick. A steal for Alberta in the second end and a score of three points in the seventh end saw Alberta take a 7-4 victory after running New Brunswick out of stones in the final end. Both teams are now tied for the top spot at 5-1. 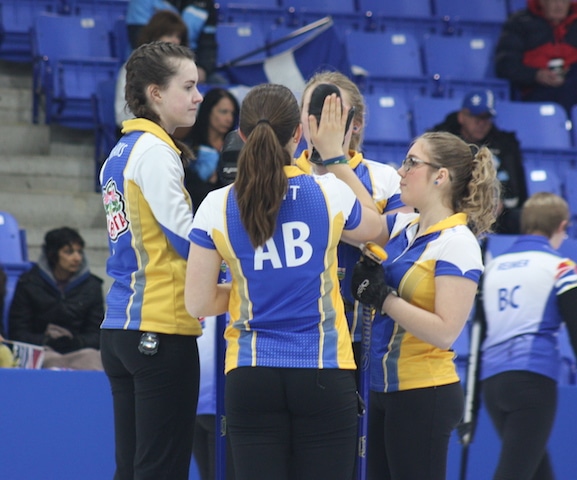 In the other two matchups, Quebec (3-3) earned a 6-2 win over Northern Ontario (4-2), while Manitoba downed Nova Scotia 7-3, leaving both teams with 4-2 records. The final playoff teams will be determined after championship pool play wraps up on Friday. In Boys’ play, Tyler Tardi of British Columbia remains undefeated after downing Nova Scotia 9-4. The Ontario squad skipped by Hazen Enman also picked up a crucial win over Northern Ontario, and Saskatchewan holds onto second place after an 8-2 win over Quebec. Like the Girls, final playoff teams in the Boys competition will be determined after all Championship round games are completed on Friday (Draws at 9 a.m., 1 p.m. and 5 p.m., all times EDT).