Young Yellowknife curlers soaking up the experience at U18 Championships

(Story by Cathlia Ward) It’s a long trip from Yellowknife, N.T., to Moncton, N.B. Add in a week of playing some of the top teams in Canada, and being the youngest athletes in the event and you’ve got a tiring week ahead. The young team skipped by Oberon Lee of the Yellowknife Curling Club have found themselves in brand new territory this week at the inaugural Canadian Under-18 Boys and Girls Curling Championships and are soaking in every minute of the experience. At the ages of just 13 and 14, these boys could easily be overwhelmed by the magnitude of the event, but fortunately they have a wealth of knowledge and experience with them on the bench to ensure they get the most out of their first national experience. Tara Naugler, a native of the Northwest Territories, is enjoying a bit of a homecoming as she coaches her son, Adam, at the national championship. Curling fans may know the family name Naugler from watching her husband, Tom, play with Jamie Koe, who made a historic run at the 2012 Brier. What most don’t know is that curling talent runs deep in the Naugler household: Tara is a former Canadian Junior champion, winning as second stone for Meredith Doyle of Nova Scotia in 1997. 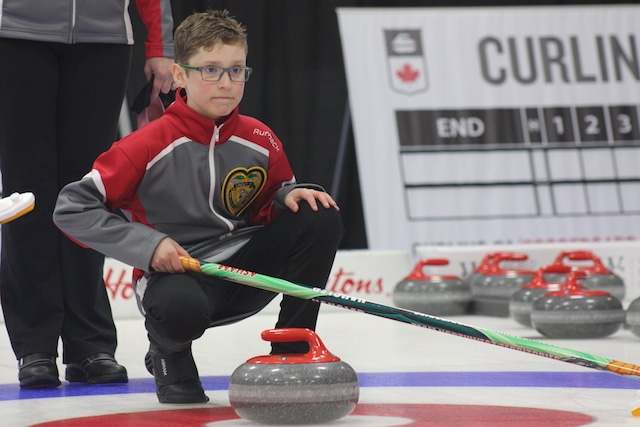 “It’s pretty great to be back on the East coast, and to get to coach my son here,” she says. “We’ve had a number of people come to say hi, and drive just to see us and see him play and that’s pretty special. I have a lot of amazing memories from my time on this side of the country, so it’s definitely cool that Adam is now getting to make his own.” For Adam, having Mom on the bench is normal, because, after all, she is just Mom. “It’s hard to believe she did all of that (won a Canadian Juniors),” says Adam, who plays third for Team Northwest Territories. “I mean it’s pretty cool. I don’t know, she’s my Mom, but that’s something I’d like to do too.” 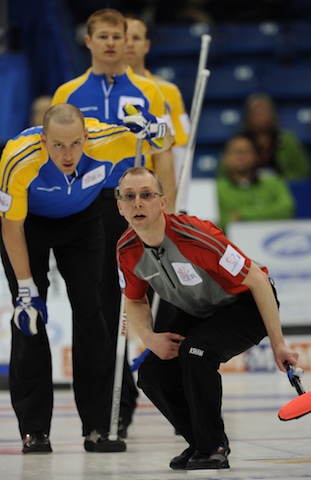 Although many Nauglers have seen the national curling stage, this is a first for Adam who is only 13 years old. “This whole thing is very exciting, I would describe it as energetic,” he says. “I was surprised, really surprised actually, at how loud it is out here. I mean at the beginning of the game it’s really quiet and then all of a sudden something happens and people go crazy. That surprised me, but it’s really cool to be out here.” Adam says he looks at his family’s success and is inspired to think he could have success in the game as well. “My parents have both done things I want to do, if I work really hard I think, maybe I can do that too. I mean, I’d like to at least. I like to think about it,” says Adam, who added that being from the Northwest Territories is something to be hugely proud of and something he takes very seriously. “Yeah, it’s underestimated,” he says. “People think maybe it’s just cold and we don’t do too much but I want to show everyone that the NWT is a lot more. We can do anything.” No surprise there, as his Mom has shown him that anything indeed is possible with a lot of hard work. “I’ve always believed that it doesn’t matter where you are from, if you are going to put in the effort and the work you need to,” says Tara. “You are the master of your own destiny, always, and I try and instill that in these boys, too. You can overcome anything. Curling in the north isn’t a disadvantage, we have a lot of mentors and we produce a lot of great curlers who have had major success. The Koes are one excellent example. We are all very proud to be from the NWT and we want to represent where we are from to the very best we know how.” And as for coaching her son, as any coach/parent would agree, it’s always a very unique experience. “It’s special, it really is,” she says. “He’s got a lot of intensity and really loves the sport. I just want him to have fun too, and learn to love the game. Having us as parents, I don’t want him to be intimidated by that. We want him to go on and have his own success and his own experiences to be proud of. Watching him this week is very cool, I mean I can only imagine really, being here and being so much younger – and smaller),” she laughs. “(It) can be really intimidating, but just look at them, they can’t stop smiling.” 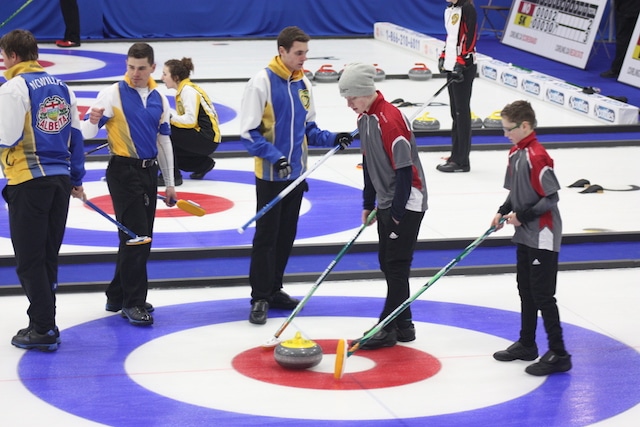 Seen in action against older opponents from Alberta, Northwest Territories skip Oberon Lee and third Adam Naugler are among the youngest competitors at the inaugural Canadian Under-18 Boys and Girls Curling Championships in Moncton, N.B. (Greg Weston/Curling Canada photo)