(Story by Cathlia Ward) The inaugural Canadian Under-18 Boys and Girls Curling Championships saw the first-ever champions crowned in Moncton, N.B., on Saturday night, and it was a clean sweep for Northern Ontario with Sudbury’s Jacob Horgan and Kira Brunton winning their respective gold medal matches. The day began with semifinal play. On the Girls’ side, Brunton and her team of third Kate Sherry, second Sydnie Stinson, lead Jessica Leonard and coach Steve Acorn held control over Nova Scotia’s Cally Moore throughout the entire game, stealing three ends on the way to a 6-1 win. In the other semifinal, Quebec’s Gabrielle Lavoie gave New Brunswick’s Justine Comeau all she could handle, as it came down to an open hit in an extra end for New Brunswick to score a single for the 6-5 win. That led to a New Brunswick vs. Northern Ontario final. A double for four in the second end for Brunton, followed by a steal of one in the third end set the pace for the remainder of the game. Northern Ontario held control and ran Comeau out of rocks in the final end to become the first-ever Under-18 Girls Canadian champion. 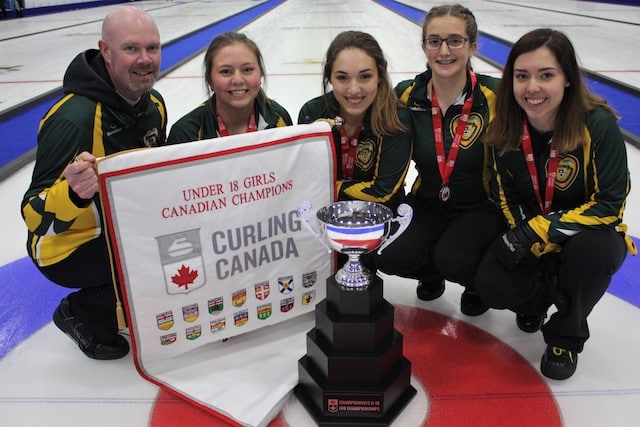 “I can’t even put it into words,” said Brunton afterwards. “We came in here wanting to make the championship rounds, no real expectations and we just…did it. We stayed loose the whole time, we were having fun and we never took anything too seriously. We didn’t think about how big this game was until it was over. Our family was awesome. (It was) amazing to look up and see smiling fans. This team, it’s amazing. Best friends, we all go to school together, so to win it together means the world to us.” In the bronze medal match, a barn-burner came down to a measure. Nova Scotia’s Moore had a hit for the possible win, needing two to tie the game and force an extra over Quebec. However when the measuring stick was put to the test, Nova Scotia scored only one, not enough to force an extra, giving Quebec’s Lavoie the bronze medal and a spot on the podium. On the Boys’ side, Jacob Horgan of Northern Ontario skipped his team to a golden afternoon with a 4-2 win over Nova Scotia’s Ryan Abraham. “It feels amazing, this is just so…. Wow I’ll be thinking about this tonight, it’s so hard to believe. I’m so speechless,” said an emotional Horgan after the win. “Nick and I have wanted a national championship and have come close a few times, this is so relieving.” 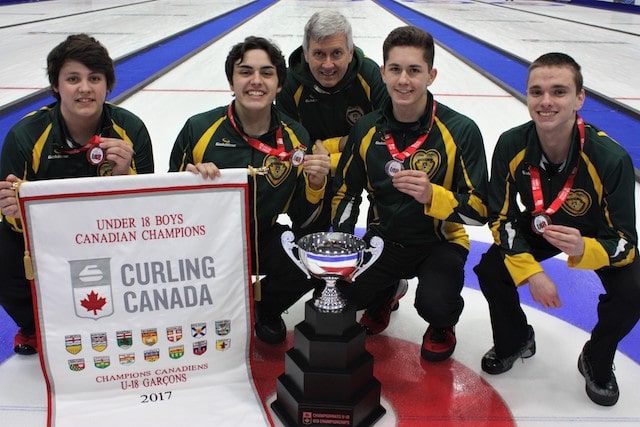 “I guess this means bragging rights?” said Horgan about being the first of his siblings to win a national championship (Jacob is the youngest of four siblings that include former Northern Ontario Women’s champions, Tracy Fleury and Jennifer Wylie, and brother Tanner, the 2016 and 2017 Northern Ontario Junior champion). “Northern Ontario is just getting better and better in every age category. These eight curlers will be the ones who will keep going, who will be the future of Northern Ontario so it’s awesome, definitely wicked to see the future for our province being so bright.” In the bronze medal game, reigning Canadian Junior Champion Tyler Tardi ended his incredible season on a high note, claiming the bronze medal with a 6-4 win after a back-and-forth game over Saskatchewan’s Rylan Kleiter. Tardi was also awarded the sportsmanship award by his peers, along with fellow B.C. skip Heather Drexel.