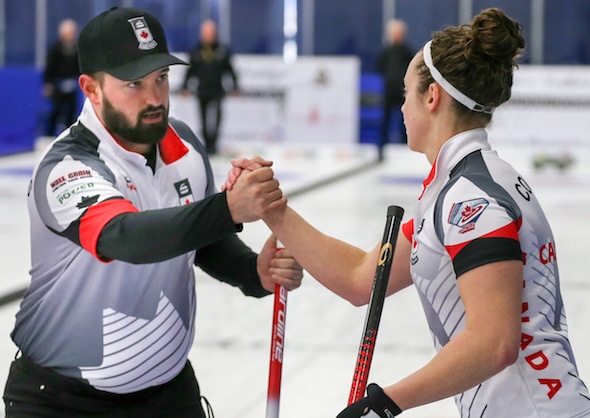 The Canadian champs, who hail from Edmonton and Winnipeg respectively, scored five points in the second end and sailed home with a 10-4 victory over the Turkish pair of Dilsat Yildiz and Alican Karatas.

It was Canada’s lone assignment on the opening day of the 39-country mixed doubles championship, which, in addition deciding a gold-medallist, also will determine the seven countries that join host South Korea at the 2018 Winter Olympics in Pyeongchang, South Korea, where curling will make  its debut as an Olympic medal sport.

“I loved the ice today; it’s curling a lot, and considering that it’s running like a true arena surface would, it might be a bit of an advantage for us because we’ve played on this kind of surface a lot,” said Carruthers. “At the same time, we’ve got to play a little bit better than we did in that game. It was a little bit sloppy. But, hey, first game in the event, Jo played great, and we’ll build on that.”

The Turks, in fact, led 1-0 after the first end thanks to a steal, but Courtney was able to make a draw to the four-foot in the second end to score a crushing five.

From there, it was a matter of keeping mistakes to a minimum to prevent a Turkish comeback. Karatas was able to make big shots in the fourth and sixth ends (for one and two respectively, with Canada looking in good shape for a steal), but Canada put it away with a deuce in the seventh end. 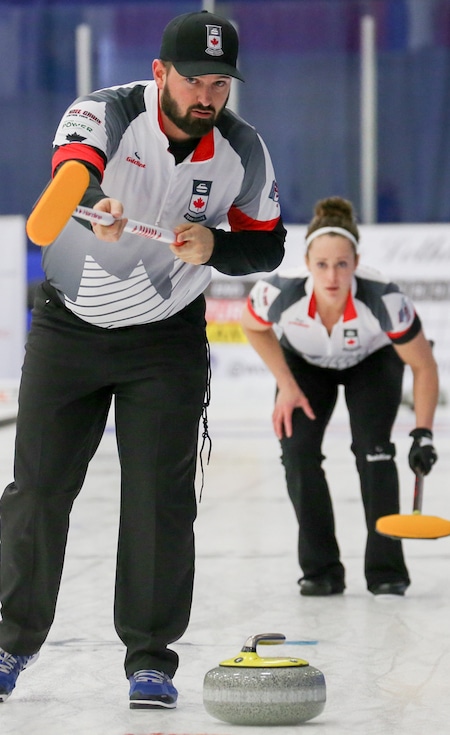 I liked the ‘W’. It’s always nice to come out of the gate with a win,” said Courtney, who’s looking to add a second gold medal this season after playing second for Rachel Homan’s Canadian and world championship team. “The goal in the first couple draws of any championship is to learn the ice, and get comfortable with what it’s doing out there because only two people are out there and there’s only two heads to figure out what’s going on.”

Not just with the ice, but with each other as both spend most of their curling seasons on four-player teams with different styles of communication for things like weight calls. That’s an adjustment, confirmed Courtney.

“We kind of defer to what we do with our four-player teams, but it’s pretty easy to understand what the other player is trying to communicate,” she said. “The point is still getting across.”

Canada, coached by Jeff Stoughton, returns to action on Sunday at 5:45 p.m. (all times MT) against France’s Sandrine  Morand and Romain Borini (0-1).

“It’s like any world championship — you go there trying to win the gold medal,” he said. “There are lots of steps and goals along the way that we’re trying to accomplish. First things first is to win each end. Keep focus on one end at a time. If we end up winning five of the eight ends in every game, we’ll be in good shape.”

In other action Saturday, reigning world champs Anastasia Bryzgalova and Aleksandr Krushelnitckii of Russia opened their title defence with a 9-4 victory over Spain’s Irantzu Garcia and Gontzal Garcia (coached by Edmonton’s Brendan Bottcher).

Meanwhile, both Canadian teams in the 2017 World Senior Curling Championships, being staged at the Lethbridge Curling Club, practised on Saturday in preparation for opening games on Sunday.