LETHBRIDGE, Alta. — Canada’s Joanne Courtney and Reid Carruthers were knocked from the ranks of the unbeaten on Monday night at the World Mixed Doubles Curling Championship at the ATB Centre in Lethbridge. 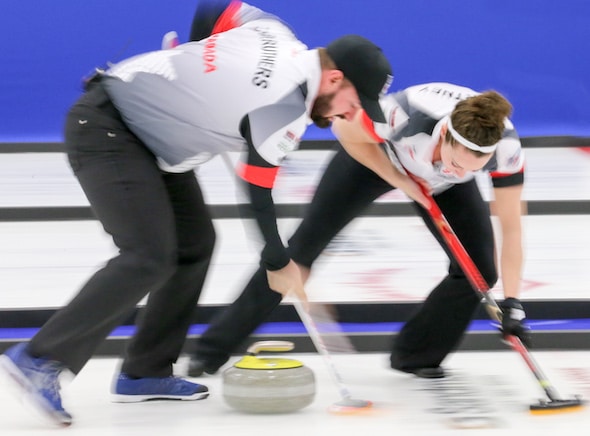 Reid Carruthers and Joanne Courtney were hard at work in their loss to the Czech Republic on Monday. (Photo, World Curling Federation/Richard Gray)

The Czech Republic tandem of Zuzana Hajkova and Tomas Paul stole crucial single points in the third and fourth ends en route to a 7-5 win over the Canadians, leaving the Czechs tied with Becca Hamilton and Matt Hamilton of the United States in first place in Group D with 4-0 records. Canada dropped to 3-1.

The Canadians were sitting shot rock behind cover in the eighth end, but Hajkova made a hack-weight pick to remove the Canadian counter and leave the Czechs with their victory.

“Oh, they played fantastic and we just had a few too many misses,” said Courtney, of Edmonton. “I had a shot for four in the fourth end and threw it just a little bit too heavy, and that would have been a game-changer. But we’re learning the ice, getting more comfortable out there, and it was still close in the end.”

That fourth end would prove pivotal as Canada was sitting second, third and fourth shot, with a Czech stone protected, but accessible with the right weight. But Courtney’s tap was heavy and went by, leaving the Czechs with the steal.

“They played well, but I didn’t set up the angles early in the ends,” said Carruthers, of Winnipeg. “We were chasing more than we should have been. So, rest and regroup — we have a long break until 9 p.m. (MT) tomorrow.”

Meanwhile, Canadian teams continue to be pace-setters in the World Senior Curling Championships, which also are being played at the ATB Centre.

It was a marked improvement, suggested Jones, on a pair of shaky victories to open the women’s event on Sunday.

“It was scary yesterday, trying to figure out the ice and trying to figure out what I needed for draw weight, which I never got yesterday,” said Jones. “I knew that if I don’t find my game, we’re not going to win this. You need to find your rhythm, you need to find your comfort zone, and you need to love the ice. You need all of that to happen in order to win a world championship. I knew that I was getting in the way of myself yesterday by probably overthinking too much, rather than just let it go, let it flow. I was a lot closer to my happy place today. Now I have to hold on to my happy place.”

A second-end deuce was followed by a steal of three by Canada against the Scots (2-1), and the Ottawans cruised the rest of the way.

“Nothing against Scotland — they’re a good team and they’ve competed well to get here,” said Cochrane. “That was really our first test and our team got pumped up. It was nice to get the hammer and we got as fortunate two in the second end and got a little bit of control and it went for there. It was a good game, the score was pretty level then we got a fortunate steal of three — I didn’t expect that, I thought it was going to be a close game down to the last shot but it was nice to win that game.”