LETHBRIDGE, Alta. — Another day, another grind, but it was good enough for Canada’s Joanne Courtney and Reid Carruthers to clinch a playoff spot at the 2017 World Mixed Doubles Curling Championship in Lethbridge. 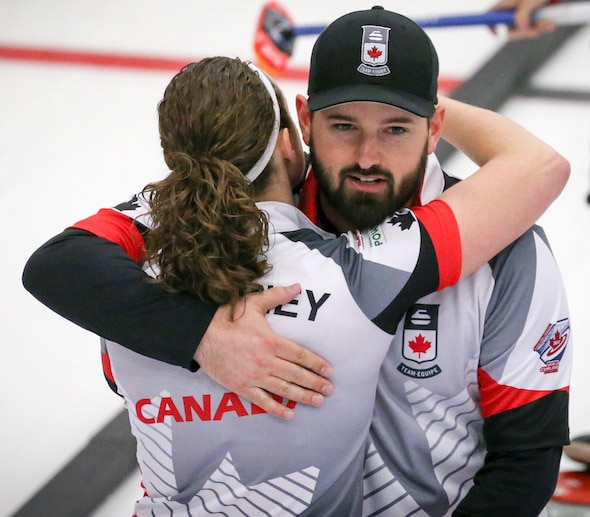 The Canadian tandem followed up a dramatic stolen victory over Germany late Tuesday night at the ATB Centre with a similar effort on Wednesday, stealing the winning point in the eighth end for a 7-6 triumph over England’s sibling duo of Anna and Ben Fowler.

With the victory, Courtney, of Edmonton, and Carruthers, of Winnipeg, improve to 5-1 and are headed to the single-knockout 16-team playoffs, which begin on Friday morning.

Tuesday night, the Canadians were down 6-3 through six ends to the Germans. On Wednesday, Canada was down 6-4 at the same point in the game, having let a 4-1 lead through three ends slip away.

England had stolen two in the sixth when Courtney’s last-rock draw wrecked on a guard. But Canada rallied to tie it with a seventh-end deuce, and earned the victory when Anna Fowler wrecked on a guard on her tap attempt to remove a Canadian stone biting the button.

“We felt like we had a strong start to that game, and then just had a couple misses in the second half to get our backs up against the wall again,” said Courtney, who’s attempting to be the first player ever to win two world championship gold medals in the same season after winning gold playing second for Team Rachel Homan. “But, again, really proud of us staying mentally tough, for giving it everything we had, for trying our best to make our shots when it mattered most in those last two ends.”

Canada will complete round-robin play on Thursday at 2:30 p.m. (all times Mountain; live on TSN) against the unbeaten U.S. team of siblings Becca and Matt Hamilton (6-0). Canada would need a victory, combined with a Czech Republic (5-1) loss to Germany (2-3) on Thursday, to finish first in its pool. Any other result will leave Canada third behind the U.S. and the Czechs.

“We’re still trying to piece it all together and put a solid eight ends of curling together, but that’s the nature and beauty of mixed doubles — you’re always going to be grinding just a little bit,” said Carruthers. “We have lots of (playoff) experience from our men’s and women’s teams; we haven’t been in mixed doubles before, and the way the playoffs work is a little different than what we’re used to — you could be playing the defending world champion in the round of 16. But for us, it’s about just focusing on what we control, and that’s ourselves.”

“The good thing is that we know we have a better game in us and we’re still pulling out wins, so that’s pretty exciting,” added Canadian coach Jeff Stoughton.

The world championship isn’t the only thing on the line; Canada needs a strong placing to clinch a berth in the 2018 Winter Olympics in Pyeongchang, South Korea, where mixed doubles curling will make its debut as an official medal sport.

The combined results of the 2016 and 2017 world championships will decide the seven teams that join host South Korea in Pyeongchang; Canada finished fifth last year, and a similar result will guarantee spot. Anything lower in the standings will be dependent on other counties’ placings. 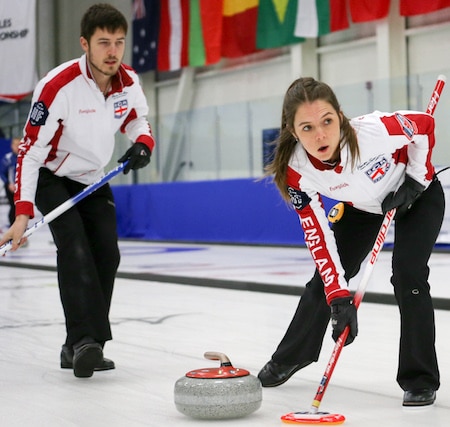 “There’s so much on the line right now, and we’re well aware of it,” said Courtney. “But the second we step onto the ice, we can’t be thinking about that. All we can be thinking about is exactly what we need to do to make the current shot and then the next shot. You can’t afford to get into a hole of self-pity or anything like that. I think Canada knows we’re trying our absolute hardest out there, there’s never going to be a lack of effort from us. Just keep our heads right, and if we can just eliminate a few more errors as we go into the playoffs, we’ll be in a good spot.”

Meanwhile, both Canadian teams at the World Senior Curling Championships have wrapped up their round-robin pool titles.

The Canadian women, who now have a bye to the semifinals, will complete their round-robin schedule today at 4:30 p.m. against Japan.