LETHBRIDGE, Alta. — Canada’s Joanne Courtney and Reid Carruthers rallied from a three-point deficit with two ends to play to record a stunning 10-6 win over Germany Tuesday night at the 2017 World Mixed Doubles Curling Championship at the ATB Centre. 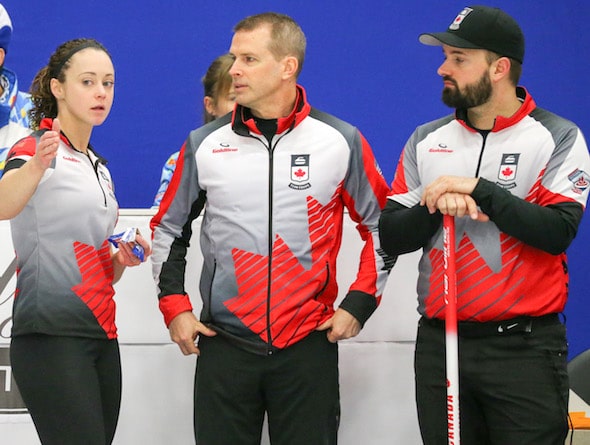 The Canadians trailed 6-3 going into the seventh end against the German tandem of Julia Meissner and Andy Büttner (2-3), but used their power-option (the pre-placed stones move from the centre line to the side of the sheet) to score four in the seventh end, and stole three more in the eighth for their fourth victory in five games.

The victory left Canada tied for second place in Group D with the Czech Republic’s Zuzana Hajkova and Tomas Paul, with the Czechs holding the tiebreaker advantage by virtue of their win over Canada on Monday.

Setting the pace is the U.S. sibling act of Becca and Matt Hamilton (5-0), who handed the Czechs their first loss on Tuesday night.

Canada, meanwhile, was heaving a sigh of relief after the escape act against Germany.

“We were not playing well early in that game, that’s for sure,” said Carruthers, of Winnipeg. “I definitely would have taken about five or six throws back that I could have put in better spots. But we took a couple deep breaths after the sixth end and said, look, it’s time to battle and we had a really, really good seventh end, which gave us the momentum and we had a really good eighth end as well.”

The Germans had taken control with three in the fourth end and a sixth-end deuce as Canada was struggling with rock placement. But the team never lost faith, said the Edmonton-based Courtney.

“An end can turn around in one shot. You can be set up and things look great, and then all of a sudden you’re in a pile of trouble,” she said. “We’re really happy with our perseverance tonight. We stayed in the moment, nobody freaked out out there — just totally invested in the process and happy to come out with the win.”

“That game is a model of our week here,” added Carruthers. “We have to grind out some of these wins because it’s not going to be easy, that’s for sure, playing against teams that are a little more experienced in this discipline than we are. But we’re shotmakers, we’re grinders, we’re good teammates for each other, and we showed that out here tonight.”

Canada is back in action Wednesday at 11:15 a.m. (all times MT) against England’s sibling team of Anna and Ben Fowler (3-2), a game that can be seen on TSN. 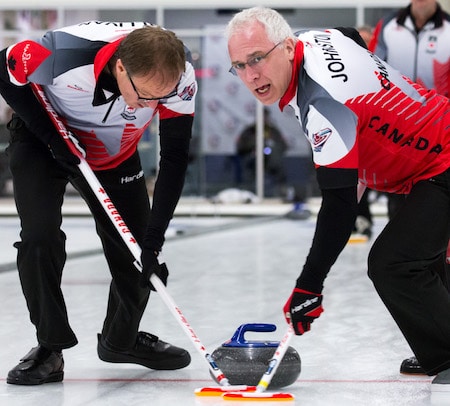 Canada closes out round-robin play on Thursday against the U.S. at 2:30 p.m. The top three teams in each of the five round-robin pools, along with the fourth-place team with the best Draw Shot Challenge distance, will make the single-knockout playoffs.

Meanwhile, both Canadian teams are playoff-bound at the World Senior Curling Championships, which also are taking place at the ATB Centre.

“We’ve been waiting for this moment for 13 months; we’ve practised, we’ve played lots of games, and we’re anxious to get out and see how well we can do,” said Cochrane, whose team closes out its round-robin schedule Wednesday at 8:45 p.m. against Wales’s Adrian Miekle (2-2). “We know we’re a good team, but we want to put on a good show. We want to perform to our very best level. We’re in the playoffs now; that’s the first priority. Then we’ll see where we go from here.”

Meanwhile, Colleen Jones and her women’s team from Halifax locked up its playoff berth by knocking off Ireland’s Carolyn Hibberd (0-6) 11-3.