LETHBRIDGE, Alta. — Canada’s entries at the 2017 World Senior Curling Championships can now turn their focus to the playoffs at the ATB Centre. 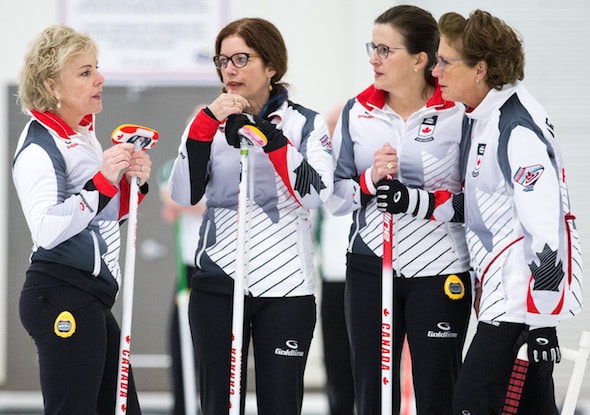 Colleen Jones’s Halifax women’s team and Bryan Cochrane’s Ottawa men’s team both finished first in their respective round-robin pools, and will have top seedings going into the playoff phase of the championships.

The win landed the Canadians directly into the women’s semifinals Friday at 2 p.m. (all times MT), where they’ll play the winner of a quarter-final cross-over match between the second- and third-place finishers in the two women’s pools. The quarter-finals are set for Thursday at 4:30 p.m. Patti Lank of the United States won the other round-robin pool to get the bye to the semifinals

“A lot of our games have been lopsided, so it’s important to feel that tension of having to make a shot in the last end to win it, and you want to make sure you’re doing it at this time in the championship,” said Jones, who is attempting to win a leading 11th World Senior Championships women’s gold medal for Canada. “We keep adding something to our database about the ice, how we’re throwing it, what is draw weight at different stages in the game. That is vital. What separates you from winning and losing is that kind of information.”

The Canadian men are seeking a 10th world seniors gold medal for Canada.

Meanwhile, Canada’s Joanne Courtney (Edmonton) and Reid Carruthers (Winnipeg) will complete round-robin play in the World Mixed Doubles Championship on Thursday at 2:30 p.m. (live on TSN) against the unbeaten U.S. team of siblings Becca and Matt Hamilton (6-0). Canada will need a victory, combined with a Czech Republic (5-1) loss to Germany (2-3) on Thursday, to finish first in its pool. Any other result will leave Canada third behind the U.S. and the Czechs.

The World Mixed Doubles playoffs — a 16-team, single-knockout affair — begin on Friday at 9 a.m., with the gold- and bronze-medal games Saturday at 4 p.m.