LETHBRIDGE, Alta. — Bring on the playoffs. 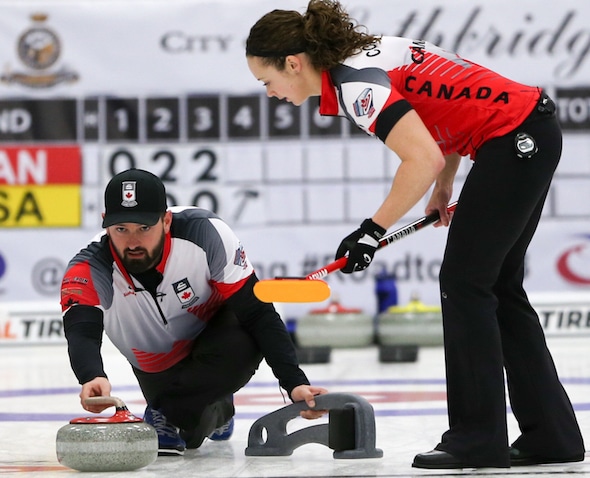 With the result, Canada finished third in its round-robin pool with a 5-2 record, behind the U.S. (7-0) and the Czech Republic’s Zuzana Hajkova and Tomas Paul (6-1).

Canada will be seeded 13th in the 16-team playoffs, and will take on 4th-seeded Gina Aitken and Bruce Mouat of Scotland Friday at 9 a.m. MT. The Scots finished fourth at the 2016 World Mixed Doubles championship in Karlstad, Sweden.

Playoff teams were seeded based on their final positions in the five round-robin pools, combined with their Draw Shot Challenge totals.

“We’ll have to park that (loss to the U.S.), and just make sure we stay confident going into tomorrow,” said Courtney, of Edmonton. “It all comes down to execution in mixed doubles. There were a lot of heavy draws in that game, so if we can be at the top of the rings tomorrow, we’ll be in a good spot.”

Canada, coached by Jeff Stoughton, was behind the 8-ball early against the U.S. team, giving up four in the first end.

“Just a tough start to the game,” said Courtney. “We missed four of five — maybe four and a half out of five shots, and that’s a tough way to start against a good team. It was nice that we battled back and made it closer, and we’ll make sure we take the positives into tomorrow.

Courtney (who won the world women’s championship last month playing second for Rachel Homan) and Carruthers, of Winnipeg, came back to tie it with a deuce in the second end and a stolen deuce in the third.

But the U.S. rallied with an important two in the fifth end on a lovely angle raise from Becca Hamilton. The teams then traded single points before Canada was set up for a game-tying steal in the eighth end before Becca again came through with a wonderful shot, drawing to cover the button for the victory.

Now Canada has to regroup for the Scots, who topped their pool with a perfect 7-0 record. 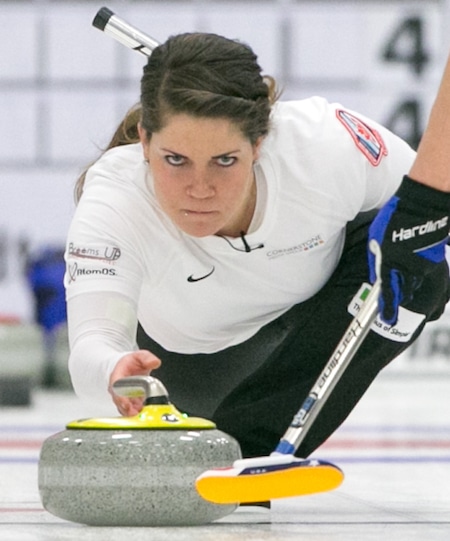 Becca Hamilton of the U.S. made the game-winning draw to lift her team to victory. (Photo, World Curling Federation/Richard Gray)

“There were definitely some good things we showed out there,” said Carruthers, a world men’s champion in 2011 with Stoughton as his skip. “That was the goal — we had to make the playoffs, that’s the first step. Now, it’s just about coming out and bringing our best game tomorrow because we still haven’t seen it. We haven’t been quite as consistent enough. But we’re talking lots, working hard, matching stones — it’s just a matter of getting that magic formula going tomorrow.”

CLICK HERE for a look at all of the first-round playoff matchups.

Canada is not only playing for a world title, but will need a strong finish in the playoffs in order to secure a berth in the 2018 Winter Olympics in Pyeongchang, South Korea, where mixed doubles curling will make its debut as a medal sport.

The combined results of the 2016 and 2017 world championships will decide the seven teams that join host South Korea in Pyeongchang; Canada finished fifth last year, and a similar result will guarantee a spot. Anything lower in the standings will be dependent on other countries’ placings.

Teams knocked out of contention for the gold medal will continue playing off to determine the final rankings, with the top 12 finishers earning Olympic qualifying points.

Bryan Cochrane’s 6-0 Ottawa men’s team — in pursuit of Canada’s 10th gold medal at the World Seniors — has the top seed in the eight-team quarter-finals, which get underway Friday at 10 a.m.

The men’s semifinals are scheduled for 6 p.m. on Friday, with the gold- and bronze-medal games Saturday at 2 p.m.

On the women’s side, two-time world women’s champion Colleen Jones, third Kim Kelly, second Mary Sue Radford, lead/vice-skip Nancy Delahunt and coach Helen Radford also are the top seed with a 7-0 record and went straight to the semifinals at 2 p.m. on Friday as a result (the smaller women’s field, with two pools compared to three in the men produced a different playoff format).

Team Canada will take on former world women’s champ and defending world senior women’s champ Jackie Lockhart of Scotland (5-1), while Patti Lank of the U.S. plays Cristina Lestander of Switzerland (4-2) in the other semi.