LETHBRIDGE, Alta. — Team Canada put together its finest performance to date at the 2017 World Mixed Doubles Championship, and it produced a crucial playoff victory on Friday morning at the ATB Centre. 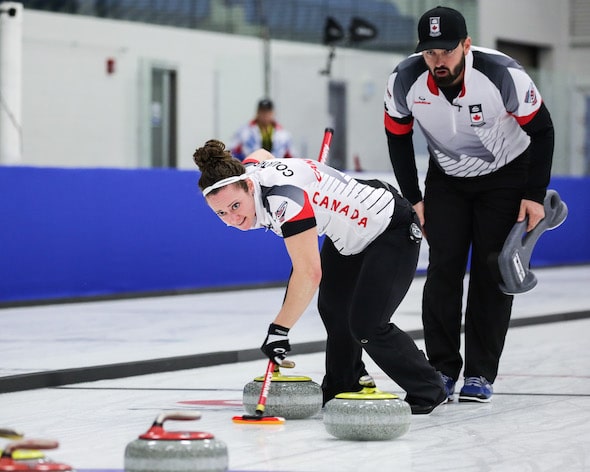 Edmonton’s Joanne Courtney and Winnipeg’s Reid Carruthers broke open a tight game with a huge four in the seventh end and sailed home with an 8-3 victory over the previously unbeaten Scottish pairing of Gina Aitken and Bruce Mouat.

With the victory, Courtney, Carruthers and coach Jeff Stoughton advance to the quarter-finals, where they’ll play another undefeated team, Latvia’s Santa Blumberga and Andris Bremanis, Friday at 7:30 p.m. (live on TSN; all times MT). Latvia advanced with a 6-4 win over Sweden’s Camilla Noreen and Per Noreen.

A victory by Canada over Latvia would clinch a top-four finish and a berth for Canada in the 2018 Winter Olympics, where mixed doubles curling will make its debut as a medal sport.

“We were calm and focused heading into that game,” said Courtney. “We had a good meeting yesterday and a good practice, and we just talked about wanting to use our sweeping as much as we can on all of our shots; a lot of our misses were heavy throughout the week. And it worked out well for us today. We both felt pretty good about draw weight going into the game, and it’s clear what we need to do out there. The more we can just stay loose and totally immersed in the moment, the better it is.”

That was evident early against the Scots as Canada played a textbook first two ends — forcing Scotland to take one in the first, and then coming back with a go-ahead deuce in the second on Courtney’s lovely angle-raise tap.

The teams traded singles the next two ends before another perfect end from the Canadians produced the game’s first steal to give Canada a 4-2 lead. 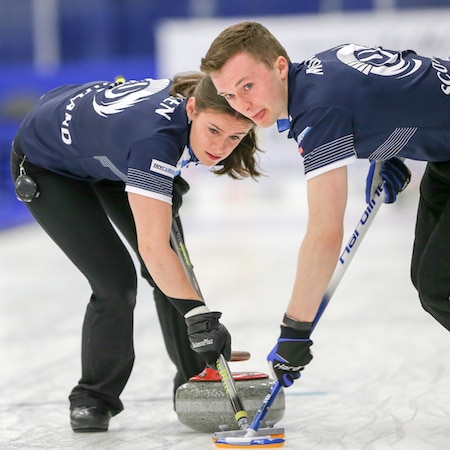 The game was put away in the following two ends. First, Scotland called a power play in the sixth (the pre-set stones are moved to the side of the sheet instead of on the centre line), which typically secures two points for the team with hammer. But Canada managed to force Scotland to a single point.

And in the seventh, Canada called a power play of its own and used it to perfection, with Courtney making a perfect draw behind the corner guard to sit two buried, and then Carruthers making a wonderful hit and roll behind the guard. Scotland attempted to bail out with a freeze behind the guard, but Aitken was wide with her attempt and Courtney made the open hit for a crushing four to put the victory in the bank.

“I think we were just playing smart; we were managing our misses a little better,” said Carruthers. “We’ve been playing well all week, but just missing the wrong way and it’s been getting us into trouble. This game we didn’t do that a whole lot; we dialled it in.”

Carruthers suggested Friday’s performance was much closer to what the duo had displayed en route to winning the Canadian championship earlier this month in Saskatoon.

“We have to build on this,” he said. “This was a great game for us, and lots of positives can be taken from this game. This was Reid and Joanne from Saskatoon, and hopefully we can continue this on later.”