LETHBRIDGE, Alta. — The first job is done, and one more remains for Canada’s Joanne Courtney and Reid Carruthers at the 2017 World Mixed Doubles Curling Championship in Lethbridge. 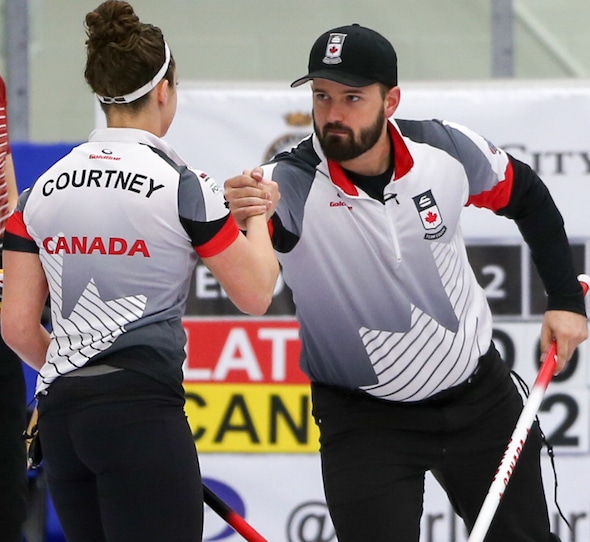 A 10-5 win over the previously unbeaten Latvia duo of Santa Blumberga and Andris Bremanis Friday night at the ATB Centre clinched a berth for Canada in the 2018 Winter Olympics in Pyeongchang, South Korea, where mixed doubles curling will make its debut as a medal sport.

And it also landed Courtney and Carruthers in Saturday’s noon (all times MT) semifinal against China’s Rui Wang and Dexin Ba, the silver-medallists at the 2016 World Mixed Doubles in Karlstad, Sweden.

“These guys are so competitive; they got us to the Olympics, but now they want to win a gold medal,” said national coach Jeff Stoughton. “They know they have unfinished business here, and they want to finish this off on the right note, and I think they have a good shot.”

The Canadian team put together arguably its two finest games of the 2017 World Mixed Doubles on Friday after barely scraping out wins in two of its final three games to qualify for the playoffs.

An 8-3 win over Scotland’s Gina Aitken and Bruce Mouat in the morning draw landed the Canadians in the quarter-finals against Latvia.

After giving up a first-end deuce to Latvia, Canada rebounded with a go-ahead three in the second end, a steal of two in the third and one more in the fourth.

Latvia clawed back with two in the fifth end, and stole one more in the fifth. But Courtney’s control-weight outturn takeout hit and stuck for four to prompt handshakes and a celebration.

“We’re extremely pleased with the day,” said Courtney. “We knew we had to make the semifinal here for Canada to have a spot in the Olympics and we’re just thrilled we got the job done. We took all of our lessons from the week and brought them into today’s game. We didn’t grip the stick too tight out there; we were able to stay relatively loose. It was a great day.”

The Olympic berth was the result of a two-year World Curling Federation qualifying process that combined the results from last year with this year to determine the seven teams that will join hosts South Korea. A year ago, the Canadian team of Marliese Kasner and Dustin Kalthoff finished fifth, including two gutsy classification-round wins after losing the quarter-final to fall out of medal contention. 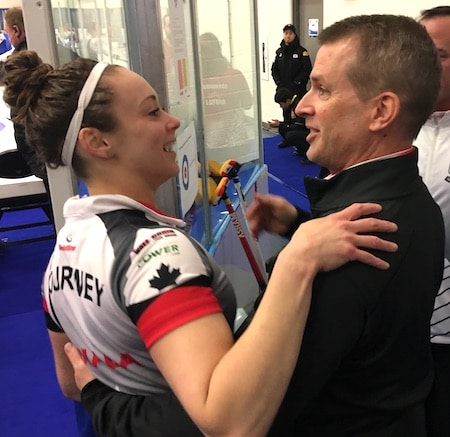 “Definitely proud,” said Carruthers. “To secure that berth for Canada, it’s a huge honour for us to help achieve that, with our team this year and Team Kalthoff/Kasner last year. There was a lot of pressure coming into this week, and we didn’t have a great start to the week, but we’ve sure ramped it up now and hopefully we continue this tomorrow.”

While Canada takes on China, Zuzana Hajkova and Tomas Paul of the Czech Republic will be playing Switzerland’s Jenny Perret and Martin Rios in the other semi. Rios combined with Nadine Lehmann to win the 2012 World Mixed Doubles title.

Canada has just one bronze medal in the eight previous World Mixed Doubles Championships, won by Alli Flaxey and Sean Grassie in 2009.

“Two more wins,” said Carruthers. “We didn’t come here to finish fourth. We came here to try to win this thing. I know Jo’s record in the worlds is pretty good and mine’s not too shabby. We’ll see what we can do tomorrow.”

“We want to bring a medal back to Canada,” added Courtney. “We’ve only won one bronze medal so we’d love to get a medal tomorrow, so we’ll be playing just as hard as we did today and hopefully we come out on the right end.”

Meanwhile, both of Canada’s teams will play for gold medals on Saturday in the World Senior Curling Championships, which also are being played at the ATB Centre.

A few hours after Colleen Jones’s Halifax team won its semifinal, Ottawa’s Bryan Cochrane nailed down a 5-2 win over Ireland’s Peter Wilson to ensure that both Canadian entries will win medals.

Cochrane, backed up by vice-skip Ian MacAulay, second Doug Johnston, lead Ken Sullivan, alternate Howard Rajala and coach Bill Tschirhart, was in a tight game with the Irish, who were reluctant to mix it up. Canada took two in the first, gave one back in the third, and then took single points in the fourth, fifth and sixth ends to put the game out of reach.

After a perfect 6-0 round-robin run, Cochrane said his team was eager to get started in the playoffs, and it showed on the ice.

“It’s a pretty big deal, it’s very special,” said Cochrane. “We didn’t want to say we’re coming here to definitely play in the gold-medal game, but that’s been the goal. I think we deserve to be in this game; we’re playing well and looking forward to it.”

Canada will take on defending world senior men’s champ Mats Wranå of Sweden in Saturday’s 2 p.m. gold-medal game after the Swedes knocked off Uwe Saile of Germany 7-3 in the other semifinal. Wranå defeated Canada’s Randy Neufeld in last year’s gold-medal game on home-ice in Karlstad, Sweden.

Jones, with third Kim Kelly, second Mary Sue Radford, lead/vice-skip Nancy Delahunt and coach Helen Radford, was a 5-3 winner over Scotland’s Jackie Lockhart in the women’s semifinal, and will battle Switzerland’s Cristina Lestander for gold on Saturday at 10 a.m.