Fourteen teams are officially a step closer to achieving their gold-medal dreams after being named to the field for the 2017 Tim Hortons Roar of the Rings, it was announced today by Curling Canada. 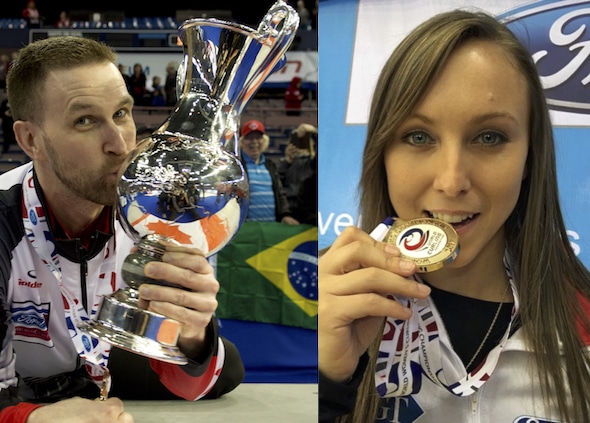 World champions Brad Gushue, left, and Rachel Homan will headline the field for the 2017 Tim Hortons Roar of the Rings in Ottawa. (Photos, Curling Canada)

The seven men’s and seven women’s teams will compete from Dec. 2-10 at the Canadian Tire Centre in Ottawa for the right to represent Canada in four-player curling at the 2018 Winter Olympics in Pyeongchang, South Korea.

It will be a who’s-who of Canadian curling coming to Ottawa, led by the recently crowned 2017 women’s and men’s world champions: hometown favourite Rachel Homan of Ottawa and 2006 Olympic gold-medallist Brad Gushue of St. John’s, N.L.

Additionally, the reigning Olympic gold-medallists — Brad Jacobs of Sault Ste. Marie, Ont., and Winnipeg’s Jennifer Jones — are returning in hopes of defending the Tim Hortons Roar of the Rings titles they won four years ago in Winnipeg, and then looking to make it back-to-back Olympic gold.

Calgary’s Kevin Koe, meanwhile, returns to Ottawa looking to replicate the success he enjoyed in the city in 2016, when he won the Tim Hortons Brier and then followed up with gold at the 2016 World Men’s Championship in Basel, Switzerland.

Today’s announcement is the culmination of a qualifying process that began during the 2014-15 season, with teams able to qualify directly for the Tim Hortons Roar of the Rings in three distinct manners:

In some cases, teams clinched more than one berth; Homan, for instance, had four direct-entry berths based on the qualifying criteria, while Jones had three. On the men’s side, Gushue qualified in three different ways while Koe did it twice.

Here’s a look at the 14 qualifiers:

The field — nine men’s, nine women’s teams — in Ottawa will be completely filled in November when two more qualifiers are decided at the Road to the Roar Pre-Trials, Nov. 6-12 at Credit Union Place in Summerside, P.E.I. That event will feature 12 teams of each gender, playing down for the two Tim Hortons Roar of the Rings berths.

The Tim Hortons Roar of the Rings will feature nine-team round-robin draws in both genders, leading to the playoffs.

Full-event packages for the 2017 Tim Hortons Roar of the Rings are now available by CLICKING HERE.

Tickets also are available for the Road to the Roar Pre-Trials. CLICK HERE for more information.