When Manitoba skip Dennis Thiessen turned to his team to celebrate winning the gold medal at the 2017 Canadian Wheelchair Curling Championship earlier this month, he was met with an unexpected response from his lead: “I want to keep playing,” protested Carolyn Lindner, in her first season with the team. “I’m just finding my groove!” Those words might be surprising to some, but not to her teammates, who watched Lindner develop from a complete curling rookie to a Canadian champion in just few short months – a testament to the determined spirit that propelled her through the challenges of a life-changing illness. 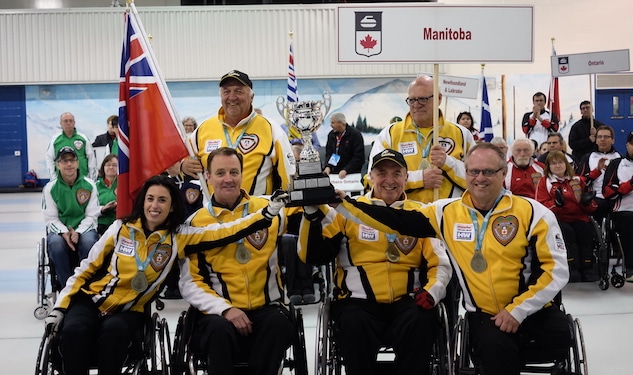 Four years ago, Lindner was living in Winnipeg with her husband and 10-year-old son, working as a teacher and active with many recreational and sporting activities that included yoga, boxing classes, ice climbing, cycling, badminton, as well as hiking and cross country skiing. “I loved my job and found it incredibly rewarding,” she says about being an inner city Special Education teacher. “I loved advocating for students in need. It was through my job that I subconsciously took on the attitude of not giving up until I was personally satisfied that I had put 100 per cent effort in and the desired outcome happened.” Everything changed when she contracted a flu that turned into a strain of pneumonia. “Although I wasn’t feeling well, I continued to teach, work out at the gym and do my yoga practice,” she says. “One evening I could not breathe. Hospital staff assessed me and intubated me right away as I was in septic shock. I was put on life support, in a coma for 46 days and given a 10 per cent chance of survival.” But that’s when Lindner’s never-give-up attitude took hold. On a respirator, tube fed and facing the amputations of both legs below the knee, as well as her fingertips, she woke up fighting. Hospital staff set a timeline for her treatment and recovery, but Lindner defied expectations. “My ability to stay focused and mentally navigate how to get out of the ICU paid off. Hospital staff were expecting me to be with them for a year, but I silently figured out how to get out in three weeks by setting daily goals on an imaginary time line in my head,” she says. She re-taught herself how to breathe on her own, eat and talk. A month later she had the surgeries to amputate her lower legs. And she just kept going. “In record time got my first set of legs and learned to walk in a day. A month later I got a pair of running blades and learned to run,” she says. “I lead a very active life and do everything I did before with some to no adaptations.” But curling? That’s a whole other story. 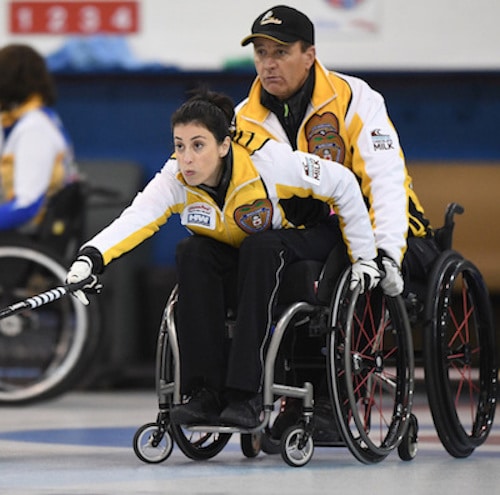 “Three years ago I was in Costco,” Lindner says. “I noticed a man in wheelchair and I was mesmerized by his precision, weaving in and out of aisles. On close inspection I noticed he was missing a leg. I walked up to him and complimented him on his wheelchair skills. We chatted for a bit and I asked him why he didn’t wear a leg. He looked at me oddly and it was then that I realized that I was wearing pants, not my usual skirts. I quickly explained that I was a double amputee and he smiled. He told me his name was Dennis and he asked if I curled. I responded with a ‘no’.” The “Dennis” she met that day was Thiessen, of course, already a two-time national wheelchair curling champion. He asked Lindner if she was interested in learning how to curl. Her answer: “No.” “He went on to tell me that he was on Team Canada and headed for the Sochi Paralympics. I congratulated him, wished him well, and we parted ways,” she remembers. A year later, they met again and Lindner congratulated him on winning the gold medal. Once again, Thiessen asked if she was interested in learning to curl. Her answer: “No.” “One more year goes by, but this time I run into Dennis at Sobey’s,” recalls Lindner. “I notice him sitting in his wheelchair looking up at the top shelf at the jars of honey. I ask if I can reach one for him. Dennis turns and looks up at me, smiles and immediately says: ‘Come on, Carolyn, just try it!’” “I realized then and there that our three-time chance encounter possibly could be the universe telling me something and I needed to listen, embrace and run with this,” she says. “The last four years of my life I have had to redefine who I am. I have learned to be fearless, not afraid to fail. To go with the flow and do it with dignity, grace and a smile on my face. Therefore, why not curling?” At the team’s first practice, she surprised herself – and the other curlers – with how soon she got the feel for consistent weight and accuracy, not to mention how quickly she took to the game. She moved her schedule around so that she could practice as much as her teammates wanted – five days a week. After every session on the ice, she felt her understanding of the game increasing. She became more consistent and proficient. The analytical side of the game appealed to her too, and she asked lots of questions, receiving support and instruction from her teammates. At the 2017 Canadian Wheelchair Curling Championship in Boucherville, Que., Team Manitoba – Thiessen, third Mark Wherret, second Jamie Anseeuw, Lindner with coach Tom Clasper and assistant coach Tom Wherret – won the gold medal with a decisive 11-1 win over Alberta’s Jack Smart. And that’s when Lindner knew she was hooked. After her four-year journey to redefine herself, after finally agreeing to try something new, after a few short months of intense preparation and the rewards of not only winning a national championship but also connecting with teammates who encouraged, taught and passed on their love of the game, Lindner turned to her skip and asked: “Can we convince everyone to stay and do this all again for a few more days?” At the banquet after the medal ceremony, Lindner received the Sportsmanship Award, voted on by the other curlers, an honour she found “incredibly humbling.” 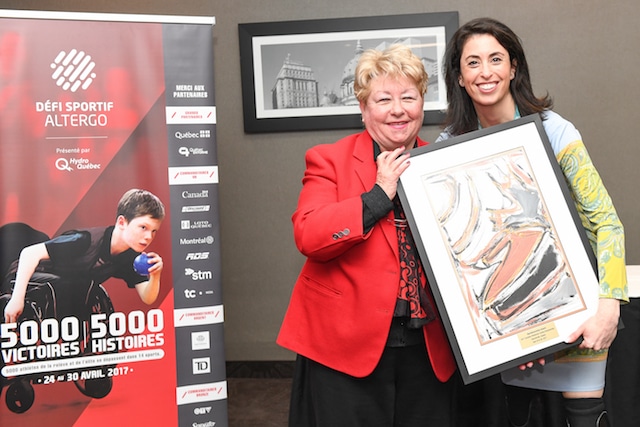 “There are times in an amputee’s life that force us to be in a wheelchair. I always hated this and felt weak and vulnerable,” says Lindner. “A combination of training with these strong, capable men and through participating in this amazing sport, I feel empowered, capable and confident during those times I may be in my chair and living my life on or off the ice.” Her next challenge? “My No. 1 future goal in curling is to make Team Canada,” she says. “That would be so exciting!” Interested in trying wheelchair curling? Programs are offered at curling facilities across the country. Contact your provincial or territorial association for more information about programs in your region. 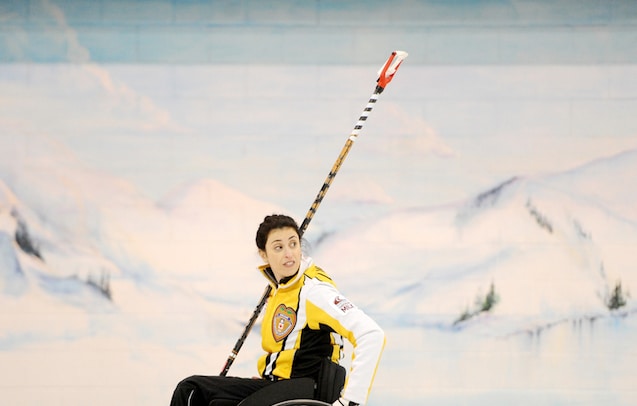 Manitoba lead Carolyn Lindner enjoys a glance back at the action during the 2017 Canadian Wheelchair Curling Championship in Boucherville, Que. (Jean-Baptiste Benavent photo)