Curling Canada will move forward on introducing a helmet policy for young and beginning curlers, it was confirmed during the Curling Canada Annual Meeting on Saturday in Cornwall, Ont.

Representatives of Curling Canada’s 14 Member Associations approved a motion that endorses the immediate release of a Curling Canada statement to encourage Canadian curling clubs and facilities to acknowledge a concern about head injuries and concussions, and urges clubs and facilities to implement helmet-use initiatives in beginner and novice curling programs, and that helmets are strongly suggested for all in the Under-12 age category.

“I believe this is an important move that puts our sport in a leadership position in terms of making sure our young and beginning curlers are playing the sport with safety in mind,” said Peter Inch, Chair of Curling Canada’s Board of Governors. “It won’t be an overnight move, but I think this pushes the conversation forward and makes sure that we’re making those safety concerns a priority.”

The Annual Meeting was the concluding event of the 2017 National Curling Congress.

In addition to the helmet policy vote, Curling Canada also welcomed two new governors to its 10-member board.

Toronto’s George Cooke, who was inducted into the Canadian Curling Hall of Fame in 2014, and Edmonton’s Brad Gibb, a former president of the Northern Alberta Curling Association, were elected to the board on Saturday. Their terms will begin on Oct. 1, and they will replace outgoing governors Shirley Osborne of Bridgewater, N.S., and Ron Hutton of Saint John, N.B.

Meanwhile, the Board of Governors also elected a new Chair and Vice-Chair for the 2017-18 season. Resby Coutts of Winnipeg will move from Vice-Chair to Chair, while Maureen Miller of Yellowknife will take over as Vice-Chair. Those moves also take effect on Oct. 1, when Inch’s term as Chair formally ends.

“I’ve had wonderful mentors to work with and I have immense shoes to fill, but I’m looking forward to the challenge,” said Coutts. “We have much to look forward to as a sport, and we have a great team, with our Member Associations, our Curling Canada staff and our Board of Governors in place to keep taking our sport in a positive direction.” 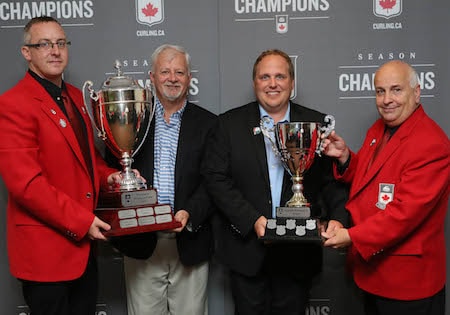 The National Curling Congress also featured the awarding of the MA Cup, presented by TSN, and the Governor’s Cup.

The MA Cup, presented by TSN, goes to the Member Association whose teams produced the best average finishes at all of Curling Canada’s national championships. The Ontario Curling Association finished on top of the standings for the first time since 2013, and also completed the sweep of the trophies by claiming the Governor’s Cup for posting the biggest improvement in averages finishes from the 2015-16 season.

Also, former Board Chair Hugh Avery of Halifax was formally inducted into the Canadian Curling Hall of Fame.