2017 For The Love of Curling Scholarship recipients announced

Some of Canada’s most promising student/athlete curlers will get a much-needed financial boost after being named recipients of the 2017 Curling Canada Foundation For the Love of Curling scholarships, it was announced today by Curling Canada. 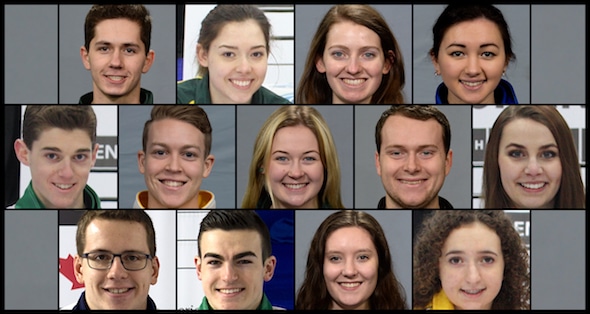 For the first time in the history of the scholarship program, there were 13 recipients — 10 received $1,000 scholarships funded by donations from curling fans and supporters of the Curling Canada Foundation, while three young women earned $1,100 scholarships thanks to a one-time grant of funds from the now-defunct Women’s World Curling Tour (WWCT).

The scholarships are in place to help young university or college students cover a portion of their education and curling costs during the 2017-18 school year.

“We couldn’t be happier to see these young curlers rewarded for their hard work — on the ice, in the classroom and in their communities,” said Peter Inch, Chair of Curling Canada’s Board of Governors and a member of the Selection Committee. “There were so many deserving recipients, and it made for some difficult decisions. At the same time, it was gratifying to see what kind of quality there is in the youth curling community; it fills me with optimism about the future of our sport.”

There were 70 applications received from across the country. The 2017-18 scholarship recipients are:

The scholarship recipients were decided by a committee that looked at both academic and curling achievements, while showing a commitment to building the sport of curling through coaching/instructing and/or volunteer activities. Applicants needed to be enrolled full-time for at least two semesters at a Canadian university or college, in addition to being registered to compete for Canadian Team Ranking System points during the 2017-18 curling season.

“I was thrilled to be a part of the selection process and just so happy to see the legacy funds of the Women’s World Curling Tour used in this way,” said Bernard, who was one of the key proponents of the WWCT. “From my time as a young player, I know how challenging it was to compete at a high level while keeping my school commitments in mind, and I’m really pleased that this program is in place to make life a little easier for these athletes.”

The Curling Canada Foundation philanthropic program was introduced during the 2013-14 season to help junior curling and to support curling centres in Canada. Last season, donors invested almost $552,000 in the sport of curling to specifically support youth programs across Canada. The Egg Farmers Rocks & Rings program presented by Curling Canada, Curling 101-Try Curling, scholarships and grants to curling clubs are only made possible thanks to the generous support of the Canada’s curling community.