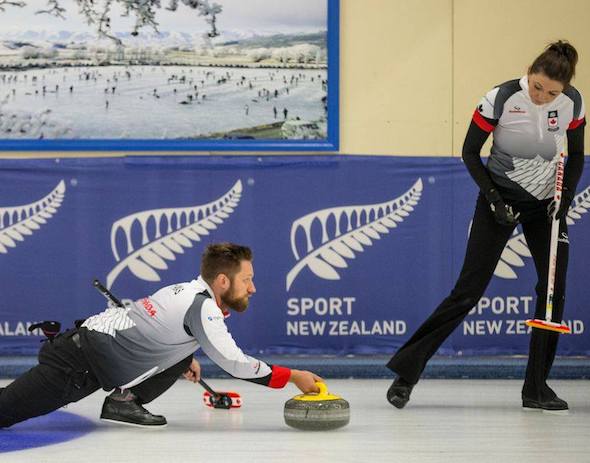 It was the first event of what will be a busy mixed doubles season, that kicks into high gear on Friday with the beginning of the 2017 Canad Inns Mixed Doubles Classic in Winnipeg.

Park and Thomas, who won gold at the Winter Games New Zealand event in 2015, bowed 7-6 to the Estonian tandem of Marie Turmann and Harri Lill Wednesday at the Naseby Indoor Curling Rink in Maniototo, New Zealand.

The Canadians, who’d entered the final with a perfect 8-0 record (7-0 in the round robin, followed by a 9-8 semifinal win over Norway’s Kristin Skaslien and Magnus Nedregotten), fell behind 5-1 through four ends against Estonia.

But Park and Thomas rallied to score singles in the fifth and sixth ends, and then stole three in the seventh for a 6-5 lead.

The Estonians, though, recovered in the eighth end to score the winning deuce to claim gold.

“They outplayed us,” Thomas told reporters afterward. “We didn’t play to our potential, they played well and they deserved their win. Full credit to them.”

The Norwegians rallied from the semifinal loss to win the bronze medal with a 10-2 win over South Korea’s Hyeji Jang and Kijeong Lee.

It was the first event of the season for Park and Thomas, who have already qualified for the Canadian Mixed Doubles Olympic Trials, Jan. 2-7 in Portage la Prairie, Man.

“This was a great result for Kalynn and Charley at this early stage in their busy season,” said Canadian mixed doubles national coach Jeff Stoughton. “They played extremely well in New Zealand, and they’ve raised the bar high for the season to come.  I know they’re excited about playing in the Mixed Doubles Olympic Trials in Portage la Prairie, and I think this start will set them up as one of the favourites at the Trials, which they know will be an extremely competitive event.”

There will be no immediate rest for Park and Thomas, as they return to Canada to get on the ice Friday at the Granite Curling Club.

A 48-team international field will be playing for a share of the $36,000 purse. Also on the line will be the final direct entry into the Canadian Olympic Mixed Doubles Trials in Portage la Prairie, which will go to the highest-placed Canadian team that hasn’t already qualified.

Canad Inns will be live-streaming a game from each draw at www.youtube.com/user/curlingchampionstour/videos. As well, live results will be available at www.canadinns.com/about-us/in-the-community/canad-inns-classic/canad-inns-mixed-doubles-classic/

The event schedule, and list of competing teams, is available at www.canadinns.com/wp-content/uploads/Draw-Pieces-V3.pdf