One of curling’s most beloved characters passed away on Friday morning, leaving behind a long list of friends on and off the ice. 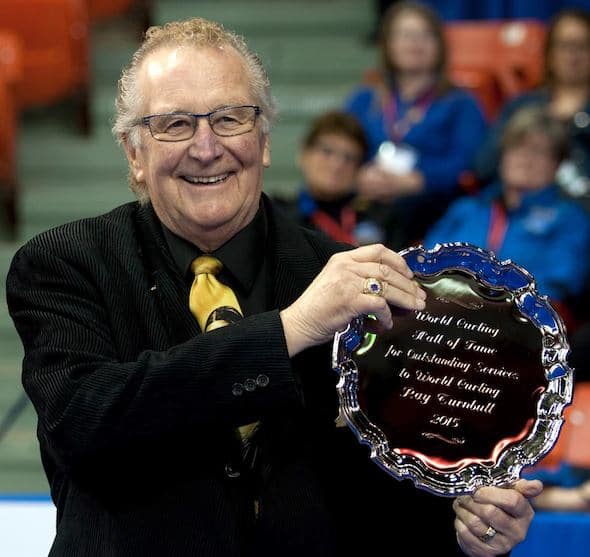 Ray Turnbull, pictured during his induction into the World Curling Hall of Fame in 2015. (Photo, Curling Canada/Michael Burns)

“As a champion, as a coach/instructor, as a broadcaster, Ray was one of the greats in our sport. His contributions to curling may never be matched,” said Resby Coutts, Chair of Curling Canada’s Board of Governors. “On behalf of the Board of Governors of Curling Canada, and all Canadian curlers, I send condolences to Ray’s family, friends and fans.”

Turnbull was known to many Canadians as one of the longstanding voices of TSN’s curling broadcast team — a role he took on in 1985 and didn’t vacate until 25 years later when he retired from the TSN crew following the 2010 World Men’s Championship in Cortina d’Ampezzo, Italy.

It was his longtime partner Vic Rauter who tweeted out the news on Friday morning.

But Turnbull was much more than a curling broadcaster. He was a champion player, an internationally renowned coach and an advocate for the sport of curling.

“I’ve always thought I was extremely lucky to have been able to make a living from this wonderful sport that has given so much pleasure to people around the world,” said Turnbull upon his 2015 induction into the World Curling Hall of Fame. “There are so many friends, teammates and family members who’ve helped me to get here, and I’m sharing this honour with all of them.”

Turnbull played in two Macdonald Briers as the lead for Terry Braunstein’s team; he was just 18 when he played in 1958 at Victoria, and then seven years later at Saskatoon, he teamed with third Don Duguid and second Ron Braunstein to win the Canadian title. He would go on to win a silver medal at the 1965 Scotch Cup world men’s championship in Perth, Scotland.

“There is nothing that can compete with walking down that centre ice sheet in Saskatoon in 1965 as Canadian champion,” Turnbull told the Winnipeg Free Press in 2015. “And to be able to have done it with three of my very best friends made it even more special.”

He also played in two Canadian senior men’s championships representing Manitoba, in 1994 and 1995.

Not long after his Brier triumph, Turnbull and two of his peers — Duguid and Wally Ursuliak — saw a void in curling instruction, and filled it by running a series of instructional clinics. Those clinics soon went worldwide, and Turnbull is acknowledged in having had a profound effect on the development of the game outside of Canada — particularly in Norway, where he worked with future champs such as Dordi Nordby, Eigil Ramsfjell and Pål Trulsen.

“We met in 1968, and even though we were heated competitors in the curling school business, I never doubted Ray’s genuine passion for our sport,” said fellow Canadian Curling Hall of Famer Warren Hansen. “That passion carried on into his days as a broadcaster, and played a significant role in boosting curling’s popularity as both a television product, as well as a live entertainment experience for fans.”