Team Canada’s Trevor Bonot stole his way to a 9-2 win to kick off the 2017 World Mixed Curling Championship today in Champéry, Switzerland. 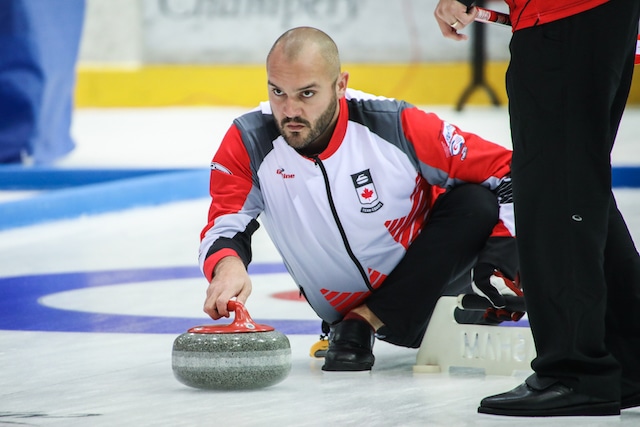 Bonot and his Northern Ontario squad – vice-skip (and sister) Jackie McCormick, second Kory Carr, lead Megan Carr and coach Jim Waite – wasted no time against Turkey’s Dilsat Yildiz, stealing the first two ends and taking a 5-1 lead into the break. Another steal in the fifth put the game out of reach for Turkey, who managed a single in the sixth and conceded. “It was a little tough to start with but we pulled through,” said Bonot after the game. “The ice was a little tricky so we just had to get to grips with that. Canada have had some solid runs the last couple of years, but the play-offs make things a little more tricky, the way they are in this competition, we’ve got to just focus on the next game. Play it game by game and see where we go.” Bonot will take on Poland’s Andrzej Augustyniak on Sunday (6 am. ET). Fans can follow the live scoring at www.worldcurling.org/wmxcc2017/livescores. Canada is looking for its first medal at the World Mixed, despite posting a cumulative 14-4 record at the previous two editions. The 38 teams in Champéry are split into five pools, with the top three finishers in each pool, plus the fourth-place team with the best Draw-Shot Challenge total, advancing to the 16-team, single-knockout playoffs. The playoffs begin on Friday, Oct. 13, with the semifinals and gold- and bronze-medal games slated for Saturday, Oct. 14. Selected playoff games, including the gold-medal game, will be streamed live on the World Curling Federation’s YouTube channel, www.youtube.com/user/WorldCurlingTV For the event schedule, live results, teams and news visit www.worldcurling.org/wmxcc2017 Team Canada updates will be available at curling.ca.